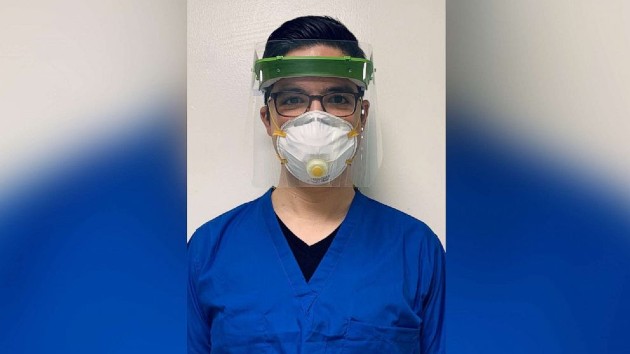 By ERIN SCHUMAKER(NEW YORK) — After two weeks treating COVID-19 patients in front-line Brooklyn hospitals, Dr. Manuel Penton III, age 32, finally has a much-needed day off.The previous 14 days were a blur of back-to-back patients and deaths. Doctors fell ill. One nurse had to be intubated by colleagues after her condition careened downhill. As supplies dwindled, issued surgical gowns grew flimsier, then paper-thin. When the doctors pulled them on, they ripped. Other days they were offered rain ponchos for protection. By this point, Penton was sourcing his own face masks, donated by friends and family across the country. The hospital chaplains gathered the staff for a decompression moment. Co-workers broke down as they discussed the sick nurse.Penton took his phone out of its protective ziplock bag and gave it to critically ill patients so they could say goodbye on speakerphone. Family members weren’t allowed into the hospital.Penton had started his COVID-19 stint as cases were cresting in New York City and more than 700 New Yorkers were dying each day. As a pediatric infectious disease doctor in the final year of his infectious disease fellowship, Penton felt more prepared than many to tackle mysterious infections. Where he felt out of his depth was in treating adults.”I’m used to explaining newborn life to people,” he said. “I’m used to moms and dads who are anxious. I’m at end-of-life now. I’m talking to children about their parents.”Because he’s a younger member of the hospital staff, Penton and other fellows volunteered for the riskiest roles in patient care to protect the older attending physicians in their 60s and 70s, meaning he makes face-to-face patient rounds multiple times each day.All that exposure adds up. The Centers for Disease Control and Prevention estimated that roughly 10,000 U.S. health care workers reported having COVID-19 and that 27 had died as of mid-April. The actual figures are likely much higher.This week, New York Gov. Andrew Cuomo called on the federal government to provide hazard pay for front-line workers risking their lives during the outbreak.The proposed 50% bonus would apply to transit, grocery store and delivery workers, as well as health care providers.”Essential public workers are the ones on the front lines every day carrying us through this crisis,” Cuomo said. “We must ensure their efforts and sacrifice are appropriately recognized.”Millennial doctors take on risky roles in COVID-19 hospitals“We’re to some extent, playing a crazy game of Russian roulette when you walk into a room. I’ve treated people who were my age. I’m not scared on a day-to-day basis, but I would be lying to say it doesn’t affect me,” Penton said.Despite the danger, for Penton, volunteering wasn’t a question.”This could be one of the finest moments for our generation,” Penton said.

Millennial doctors are uniquely positioned, he explained. They’re experienced and knowledgeable enough to treat patients effectively, but young enough to be in a lower-risk category for contracting severe COVID-19.Hazard pay won’t help young doctors with deep medical school debtHowever, like many Millennials, Penton is deeply in debt.”I’m looking at a student loan debt of $318,000,” he said of his medical school debt. “That few extra thousand dollars, while it may make a big difference to some people, for me, most of that money is going to go back into paying off my student loan debt.”The average debt doctors are saddled with after medical school was $200,000 in 2019, according to the Association of American Medical Colleges.Instead of hazard pay, Millennial doctors want loan forgiveness, he said.When hazard pay came up in the hospital workroom on the final day of Penton’s COVID shift, residents and fellows agreed. They were all in hundreds of thousands of dollars of debt. Hazard pay was a nice idea. It wouldn’t benefit them much.”This is the very same debt that allowed me to get the education that’s allowing me to help save lives,” he said.The idea clearly has legs. Since the beginning of the month, more than 500,000 people have signed a MoveOn petition to include forgiving student loan debt for health care providers as part of the next stimulus bill.It’s also gained traction with health care organizations. Along with dozens of other doctor groups, the American Medical Association, the country’s largest association of physicians, wrote a letter to Congress on April 7, asking for federal student loan forgiveness for doctors caring for patients on the front lines of the COVID-19 pandemic.”For these residents and early graduated medical students, whose debt averages over $200,000, we urge Congress to provide at least $20,000 of federal student loan forgiveness or $20,000 of tuition relief,” the letter reads.Being a young doctor can sometimes feel like a thankless job. While Penton was on the COVID shift he was sleeping in a hotel to protect the three roommates he normally lives with. He hasn’t seen his fiancee, who lives two neighborhoods away, in more than five weeks.But while the job can be thankless, right now is not one of those thankless times.”There’s a real feeling from Americans, who you talk to every day, and you see in the streets, who you see clapping from their windows, that they are appreciative and they have gratitude,” he said. “Real gratitude like I’ve never seen before.”He’s hopeful that the gratitude everyday Americans display from their windows, and that politicians speak of during press conferences will be converted into financial security for doctors risking their lives in the nation’s hospitals.”People are coming together and cheering for us and care about the position we’re being put in,” he said. “It’s inspired us to speak up for ourselves and to say, ‘Hey, this is a real, tangible way that you can support us."” Copyright © 2020, ABC Audio. All rights reserved.

“No one is safe. Not one of you.”: Johnny Depp decries ‘cancel culture’
COVID deaths surge in Alabama, after state reports more deaths than births in 2020
Gabrielle Union calls out Hollywood’s pay disparity among actors of color
When to expect decision on COVID-19 vaccine boosters
Smaller COVID vaccine doses may protect children as well as full doses in adults: Pfizer
How the definition of success has changed in COVID fight