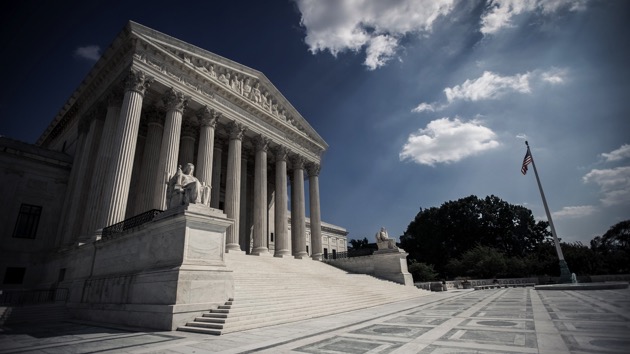 (WASHINGTON) — The U.S. Supreme Court on Monday ruled that non-unanimous jury convictions, which have still been allowed in Louisiana and Oregon, violate the constitutional guarantee of a fair trial. The 6 to 3 decision, overturning a 1972 Court precedent, mandates a nationwide standard that even a single juror’s vote to acquit on charges of serious crimes is enough to prevent a conviction. “This Court has long explained that the Sixth Amendment right to a jury trial is ‘fundamental to the American scheme of justice,’” writes Justice Neil Gorsuch for the majority. “So if the Sixth Amendment’s right to a jury trial requires a unanimous verdict to support a conviction in federal court, it requires no less in state court.”The ruling also eliminates the final vestiges of a practice with roots in the Jim Crow era that critics say was aimed at diluting the influence of minorities on juries.Justices Ruth Bader Ginsburg, Stephen Breyer, Sonia Sotomayor and Brett Kavanaugh joined Gorsuch’s opinion. Justice Clarence Thomas concurred in the judgment but offered his own rationale.The Sixth Amendment states that “in all criminal prosecutions, the accused shall enjoy the right to a speedy and public trial, by an impartial jury of the State and district wherein the crime shall have been committed.”“In all, this Court has commented on the Sixth Amendment’s unanimity requirement no fewer than 13 times over more than 120 years,” Gorsuch writes.“There can be no question,” Justice Neil Gorsuch wrote for the majority, “that the Sixth Amendment’s unanimity requirement applies to state and federal criminal trials equally.”In 1972, the Court said that jury verdicts in federal felony trials must be unanimous, leaving the door open to states having a different standard.Every state but Oregon has since amended its rules to require unanimous verdicts in state felony cases. Louisiana had been a hold out until just very recently when voters moved to end the practice last year.“Today, Louisiana’s and Oregon’s laws are fully—and rightly—relegated to the dustbin of history,” wrote Justice Sonia Sotomayor in a concurring opinion. “While overruling precedent must be rare, this Court should not shy away from correcting its errors where the right to avoid imprisonment pursuant to unconstitutional procedures hangs in the balance.”Louisiana convict Evangelisto Ramos, who maintains his innocence in a gruesome murder case, brought the case to the Supreme Court in hopes that the justices would get him a new trial. Ramos was convicted by 10 of 12 jurors in his second-degree murder trial and sentenced to life without parole.An analysis of more than 900 non-unanimous felony verdicts in Louisiana by the state’s largest newspaper, The Advocate, recently found that black defendants were “significantly more likely” than white defendants to be convicted.Chief Justice John Roberts and Justices Samuel Alito and Elena Kagan dissented in the case, arguing that the Court’s precedent should not have been so easily discarded.“Lowering the bar for overruling our precedents, a badly fractured majority casts aside an important and long-established decision with little regard for the enormous reliance the decision has engendered,” wrote Justice Alito in a dissenting opinion.The minority said the Court’s decision “imposes a potentially crushing burden on the courts and criminal justice systems of those States” and “tars Louisiana and Oregon with the charge of racism.”“Non-unanimous verdicts, the Court implies, are of a piece with Jim Crow laws, the poll tax, and other devices once used to disfranchise African-Americans,” Alito wrote. “If Louisiana and Oregon originally adopted their laws allowing non-unanimous verdicts for these reasons, that is deplorable, but what does that have to do with the broad constitutional question before us? The answer is: nothing.” Copyright © 2020, ABC Audio. All rights reserved.