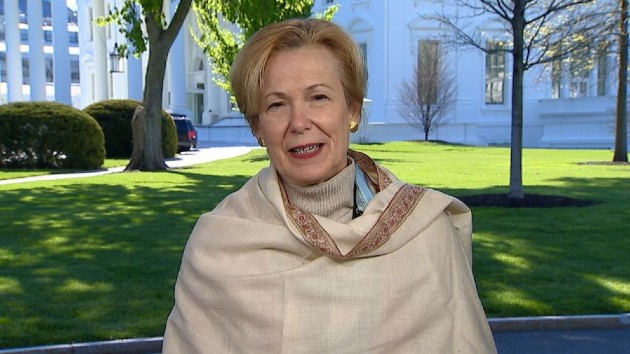 (WASHINGTON) — While acknowledging the importance of testing, Dr. Deborah Birx, the White House coronavirus response coordinator, said Sunday that it is only part of the solution to reopen the United States amid the coronavirus pandemic.”One of those critical — critical — legs of the stool is testing,” she said on ABC’s This Week Sunday, but added that monitoring cases and expanding testing are the other two elements.The president’s coronavirus response coordinator joined This Week days after President Donald Trump announced his plan to reopen the American economy after a near-total shutdown due to the coronavirus pandemic.The three-phase plan sets “gating criteria” that all states and regions must achieve before lessening social distancing measures. The criteria requires a “downward trajectory” of reported “influenza-like illnesses,” “covid-like syndromic cases” and “documented cases” or “positive tests as a percent of total tests” within a 14-day period.While the White House has insisted that the country has the testing capability to reopen the economies of several states, some public health experts have been skeptical.Birx said Sunday that the Trump administration is working on efforts to expand testing.”We’re working with every governor and every mayor, and — frankly — every laboratory to ensure that we got quality tests out there, and also to ensure that we’re meeting with the governments’ and with the governors’ — the needs that they have in each of those labs,” she said.”We have a team calling every single laboratory (working on testing) … and they are calling everyone to work with each state and local authorities to ensure that they have everything that they need to turn on full capacity, which will, we believe, double the number of tests that are available for Americans,” she told ABC News Chief Anchor George Stephanopoulos.While Birx said that the increased production would help the United States move forward, the country was experiencing an unprecedented situation.”Four weeks ago we were working off of the pandemic platform that had been developed for pandemic flus and we realized — and the president realized — that we had to change completely how we were doing testing,” Birx said.”I want to be very clear to the American people, none of our tests are 100% sensitive and specific. What do I mean by that? None of our tests that we use in medicine and diagnose 100% of the people who are positive, and correctly diagnose 100% of the people who are negative,” she added.She said that the administration believes there have been enough tests done to prevent a second wave.Birx stressed that some problems still exist in the reporting of test results.”What we don’t have right now is complete reporting. So when you look at the number of cases that have been diagnosed you realize that there’s probably 30 to 50,000 additional tests that are being done that aren’t being reported right now,” she said.A part of the reason the U.S. had to change course on testing, Birx said, was that it did not have enough information from other countries battling the coronavirus.”It wasn’t until the beginning of March that we could all fully see how contagious this virus was, how transmittable it was,” Birx told Stephanopoulos.She appeared on This Week days after Trump announced that the U.S. would be suspending funding to the World Health Organization for “severely mismanaging and covering up the spread of the novel coronavirus” by “parrot(ing)” Chinese government data and not “call(ing) out China’s lack of transparency.”While the president’s decision has been criticized by lawmakers who challenge its legality, Birx said countries that first experience any epidemic have a greater responsibility to inform the public.”It is always the first country that gets exposed to the pandemic that has really a higher moral obligation on communicating and transparency because all the other countries around the world are making decisions on that. And that’s something we can look into after this is over,” she said.”You have to over communicate, you have to communicate even the small nuances,” Birx added.

‘The Connors’ dedicates live season four premiere to Norm MacDonald
Democrats lash out at Biden administration over handling of Haitian migrants
Mom dying of ovarian cancer shares what she wants women to know about the deadly disease
First ‘SNL’ guests of the season: Owen Wilson, Kim Kardashian West, Rami Malek, and Jason Sudeikis
Jada Pinkett Smith celebrates 50th birthday on ‘Red Table Talk’; ABC to adapt Baratunde Thurston’s ‘How to Be Black’
“No one is safe. Not one of you.”: Johnny Depp decries ‘cancel culture’