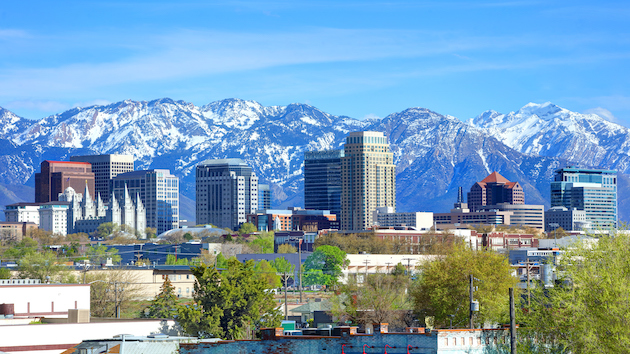 (SALT LAKE CITY, Utah.) — Utah is one of nine states in the country that has not issued a statewide shelter-in-place order — and while the fear of COVID-19 is widely shared, there has been a broad range of responses varying from county to county within the state.

Some local businesses in Northern and Southeast Utah have been allowed to reopen under newly revised orders if establishments agree to follow strict guidelines issued by county health departments.

In the Northern Utah counties of Box Elder, Cache and Rich, the Bear River Health Department extended its public health order to May 1 with an amendment that allows gyms and fitness centers to open. The order requires the facilities to screen all employees and customers for symptoms prior to entering the building; allow only one person per 100 square feet; eliminate all group activities and the use of locker rooms and showers; and disinfect equipment after each use.

After being forced by the pandemic to close its doors on March 29 and switch to online classes, the Sports Academy & Racquet Club, the largest gym in the area, will reopen this week under strict safety measures, owner Dan Smith said. Smith told ABC News they are allowing one person per 200 square feet, keeping everyone 10 feet apart, screening customers and patrons, disinfecting everything after each use, and asking their staff to wear masks and gloves.

Though Smith said he is glad to reopen, he is worried about the financial consequences the company has to bear in the near future.

“I don’t think we will feel the true effects of this for three or four months economically. I’m extremely worried because there’s a lot of unknowns,” Smith said. “This is the first step to get back to normal but we don’t know what normal is going to be. There’s going to be a new normal.”

The Southeast Utah Health Department also announced on Wednesday similar amendments giving beauty salons, gyms, tanning facilities and tattoo parlors the chance to submit a COVID-19 mitigation plan online. Once the plan is approved they will be permitted to operate.

With a total of six confirmed cases and zero deaths among the three rural counties, Southeast Utah Health Department Director Bradon Bradford said they believe these businesses can safely operate with the appropriate guidelines.

“Each of these businesses really serve the local population,” Bradford told ABC News. “So we felt like each of them had an opportunity to put in place modified measures to protect its owners, employees and clients.”

The department had received more than 50 COVID-19 mitigation plans from a variety of businesses as of Thursday.

Meanwhile, counties that have been impacted more heavily, like Salt Lake County, have closed all nonessential businesses and implemented their own stay-at-home measures, requiring people to stay inside.

With more than 1,285 cases, the highest number in the state, Salt Lake County Mayor Jenny Wilson has extended the stay-at-home order through May 1. Violators can be charged with a misdemeanor, punishable by up to six months in jail or $1,000 fine.

In Summit County, with 306 coronavirus cases, local leaders have also decided to extend their three existing public health mandates — which include a stay-at-home order — until May 1.

But other counties, like Utah County with the second highest number of cases in the state, have decided to follow Gov. Gary Herbert’s more lenient “Stay Safe, Stay Home” directive.

“We cannot let up on these measures,” Herbert said in a statement announcing the extension of the directive to May 1. “Working together, we can slow the spread of coronavirus, alleviate the stress on our health systems, and get Utahns back to work and to a level of normalcy more quickly. Extending these measures now, will save many lives.”

In Southwest Utah’s Washington County, officials are also adhering to Herbert’s recommendation of social distancing and are taking the necessary precaution when and where they feel appropriate.

Though many businesses, golf courses and parks remain open, Washington City Mayor Ken Neilson said most of them are taking protective measures and are being closely monitored.

“I really feel like people get it. I think that people really do understand this is serious business, this pandemic,” Neilson said.

He said he encourages, but doesn’t require, his citizens to wear masks and gloves.

“We have all our city employees wear masks and gloves, especially those that are in the servicing, with the parks and things like that,” Neilson told ABC News.

Not everyone, as ABC News observed in Washington City, was following the recommendations.

Though the mayor said he would not hesitate to shut down the whole county if the situation were to become dire, so far there have been only 58 cases and one death in all of Southwest Utah.

Neilson said he wants members of the public to govern themselves.

“As we move forward, sometimes going to one extreme or the other is not healthy. I believe that we need to allow people the opportunity to be free,” Neilson said. “That’s the gist from our governor, you know, let’s lock it down now as much as we can, without becoming totally obsolete with everybody out.”