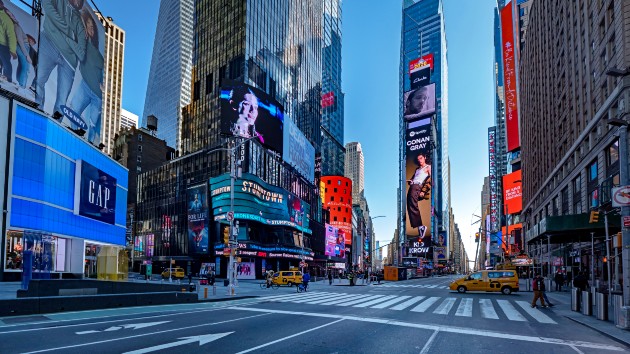 (NEW YORK) — The country is growing more pessimistic about a timeframe for a return to normalcy, with ideological allegiance extending to nearly every aspect of the crisis, including how soon Americans believe they will resume some level of regular activities post-coronavirus, according to a new ABC News/Ipsos poll released Friday.Among those Americans who say their daily routine has changed due to the coronavirus, 31% believe a return to normalcy will come by June 1, compared to 44% who said the same at the beginning of this month. The June 1 date sharply divides partisans with 51% of Republicans and only 17% of Democrats thinking they will resume normal activities by then. In the earlier poll, conducted April 1-2, more than half of Americans (59%) believed that they would return to their regular daily routine by July 1, but now, for a majority of Americans it’s even later, reflecting the increasing skepticism within the country about returning to some semblance of normal life after a near-universal shutdown of society.Three in four Americans think they will be able to resume their regular routine by the end of the summer, which is down from 84% who said the same in an ABC News/Ipsos poll released on April 3.In the newest poll, two-thirds of Democrats (66%) and an overwhelming 93% of Republicans view the end of the summer as the timeframe for a return to normal.Still, the survey, conducted by Ipsos in partnership with ABC News, using Ipsos’ Knowledge Panel, shows that Americans are slightly more optimistic about their own health and safety amid a raging public health crisis.Eight in 10 Americans are concerned about contracting the coronavirus, compared to 86% who said the same last week and down from 89% just two weeks ago. Meanwhile, 20% say they are not concerned with becoming infected.Far more Democrats (92%) than Republicans (61%) are concerned about the possibility of catching the highly contagious disease. This difference is driven by a drop in the level of concern among Republicans, from 82%, in the last week, while it is unchanged among Democrats.The new poll was conducted over a two-day stretch that came shortly after President Donald Trump sent conflicting signals over plans to reopen the country.Trump started the week insisting that “total” authority over setting terms to reopen the country falls with him, and not the nation’s governors, who have been leading the state-level response to the crisis by closing non-essential businesses and issuing stay-at-home orders.Trump’s claim comes after weeks of repeatedly resisting invoking a nationwide shutdown, leaving the decision to respond to the crisis up to the 50 chief executives, with the federal government’s assistance.But in a sharp reversal over the course of 24 hours, Trump asserted that the governors would ultimately be the ones to call the shots.”The governors are responsible. They have to take charge,” Trump said on Tuesday. “They have to do a great job, and we’re going to suggest they check people through tests or otherwise coming into their states, and they run their states very strong.”The president also signaled that same day that he believed some states would be in a position to “open up” earlier than May 1.”Frankly, it will be at a time that will be earlier than the deadline we imposed, the end of April,” Trump predicted. “So, we think some of the governors will be in really good shape to open up even sooner than that.”Amid the whiplash from the White House, protests against stay-at-home orders began breaking out, and have grown particularly intense in Michigan. Thousands of flag-waving and horn-honking protesters lined the streets outside of Michigan’s Capitol in Lansing on Wednesday, overtly rebuffing Democratic Gov. Gretchen Whitmer’s stay-at-home order.Some of the protesters, part of the demonstration dubbed “Operation Gridlock,” which was organized by groups including the Michigan Conservative Coalition, wore protective face masks, while defying social distancing guidelines to stay six feet apart.But most of the country is following precautions to safeguard against the coronavirus. Over two-thirds of Americans who went out in public in the past week say they’ve worn a face covering in the survey, up from 55% last week, while 31% said they did not.Both more Democrats and Republicans are adorning face coverings in public in the last week, but still, a 24-percentage point divide separates Democrats (80%) and Republicans (64%) — reflecting the influence of political leanings on responses.Only 20% of Democrats, and 36% of Republicans opted to not wear a mask when they left home in the last week.Since the first ABC News/Ipsos poll on the coronavirus, which was released on March 13 as the crisis only began to take hold of the nation, Trump’s approval for his managing of the outbreak has remained stable, except for the poll conducted March 18-19 when his approval increased to 55%.For the third straight week, Trump’s approval for his handling of the pandemic hovers around the mid-40s, putting him underwater for four of the five weeks that ABC News/Ipsos have surveyed the coronavirus crisis.In this poll, 54% of Americans disapprove of his handling of the outbreak. Partisanship continues to motivate attitudes about Trump’s oversight over the coronavirus, with only 7% of Democrats approving of the president compared to 86% of Republicans. Last week, 10% of Democrats and 89% of Republicans said they approved.Democrats continue to disapprove of the president’s response to the virus by a significant margin, with 92%, compared to only 14% of Republicans.This ABC News/Ipsos poll was conducted by Ipsos Public Affairs‘ KnowledgePanel® April 15-16, 2020, in English and Spanish, among a random national sample of 514 adults. Results have a margin of sampling error of 5.3 points, including the design effect. See the poll’s topline results and details on the methodology here. Copyright © 2020, ABC Audio. All rights reserved.

Bitcoin slumps to two-week low amid renewed worries of Chinese restrictions
Jazz Jennings says ‘substantial’ weight gain due to binge-eating disorder
Paris Hilton spills on her upcoming wedding to fiancé Carter Reum: “I’m not your traditional bride”
Tyra Banks reacts to Victoria’s Secret phasing out Angels
Kevin Hart opens up to Will Smith about infidelity on Red Table Talk
Former TV producer opens up about how yoga changed her life