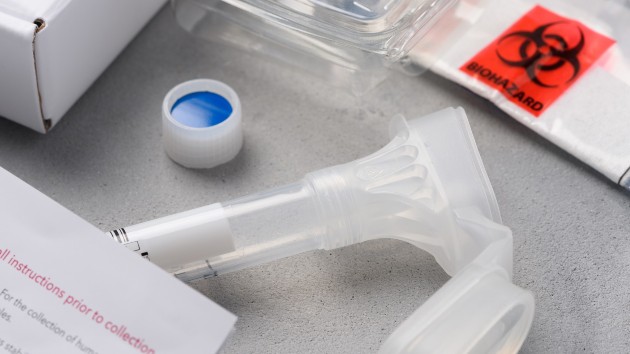 (NEW YORK) — The Rutgers University scientist who oversaw the development of a saliva test to detect coronavirus said he believes this new way to collect patient samples could serve as a bridge to widespread national testing — modeled off the kits used by familiar commercial genealogical brands like Ancestry.com and 23 and Me.”It opens up a lot of doors,” Andrew Brooks, the chief operating officer and director of technology development at the Rutgers lab, told ABC News. Brooks painted a picture of what a future with large-scale, nationwide testing could look like, and it is very similar to the method commercial genealogy firms use to collect their DNA samples from their of customers. As with genealogy tests, he said a testing company could ship a kit to the patient, they can spit into a vial and then the vial is sent to a lab for analysis.But unlike a genealogy company’s DNA review, this test would need to be prescribed by a physician, and potentially supervised via telehealth, Brooks said. And the results would need to be reported to the Centers for Disease Control and Prevention by a physician.”It will be a different overall experience because we’re making a medical diagnosis here,” Brooks said, “but the process is the same.””And for people that don’t have cars, that don’t have access, that are on quarantine. It makes it more broadly available,” Brooks said. “We’re hoping very soon … that may be very well possible.”Though the Food and Drug Administration granted emergency authorization for the saliva tests, and they’re currently being deployed in several health care facilities in New Jersey, there remains some question as to whether the levels of virus in the saliva would be high enough to be reliably detected, according to ABC News medical contributor Dr. Mark Abdelmalek. Experts in microbiology told ABC News it is plausible that the presence of virus in saliva would theoretically come from the nasal secretions that produce results for a nasal swab.Brooks said he’s confident in the science, and he has a high profile supporter in the White House. President Donald Trump praised the saliva test method Tuesday as “innovation under pressure.”Brooks has another good reason to consider the potential of easy-to-use DNA collection kits as a way to scale up coronavirus testing. He is also chief scientist for Spectrum DNA, the Utah-based company that already supplies those kits to Ancestry.com and developed the special preservative that has enabled customers to spit in a tube and mail their saliva samples to the company’s labs for DNA analysis.The same kinds of tubes can also be used to preserve the crucial sample of RNA needed to determine if a COVID-19 patient has been exposed to the virus, a development a spokesperson for Spectrum called an “incredible breakthrough.”It would be “amazing” if private companies developed and widely distributed a saliva home-test, said Leslie Bryant, the Spectrum spokesperson.”I mean think about the volume – talk about serving as many people as possible,” Bryant said.Large-scale testing is widely viewed as a key element of any plan to re-open the country. Understanding who has, or has had, the disease will allow public health officials to identify which U.S. communities can relax shelter-in-place measures and get some Americans back to work — assuming potential looming privacy issues are settled. And industry experts said scalability is just one of several benefits to an approved at-home saliva test.”The convenience, the sheer number of people you can get to – we’re all sheltering in place, you can’t leave, it’s better that you don’t leave,” said Dr. Ruth Ann Crystal, a Stanford-trained obstetrician who works closely with multiple health care technology startups. “At-home testing would be amazing.””It completely mitigates the risk of our health care professionals getting infected,” Brooks added.Can genealogy firms pull it off?Both Ancestry.com and 23 and Me have, to varying degrees, considered the potential to leverage their presence and infrastructure in the saliva testing business to develop a viable test for the coronavirus.Dr. Catherine Ball, the chief scientific officer at Ancestry.com, said the company has already shared its test kits with several independent labs across the country.

“[The labs] are in the process of evaluating whether or not our device and our stabilization fluid supports COVID testing,” Ball said. “If it works, it works. We are hopeful that we can make a positive impact if it works.”A spokesperson for 23 and Me told ABC News that the company “has explored bringing saliva diagnostic tests to market to help with the COVID-19 pandemic response,” but cited several potential roadblocks in doing so any time soon.”Our collection kit is designed to preserve DNA and, unfortunately, does not have a buffer that preserves viral RNA (which is much more delicate),” the spokesperson said. “We have explored steps to address this, but it is a significant change to our supply chain during a time where many suppliers are necessarily operating at minimal staff.”Cutting the regulatory red tapeWhether the at-home testing idea will blossom remains unclear, though Food and Drug Administration officials have made clear over the past 24 hours they are not ready for commercial enterprises to start selling in-home testing kits to consumers.”At this time, the FDA has not authorized any test that is available to purchase for testing yourself at home for COVID-19,” the agency said in a statement on its website. “The FDA sees the public health value in expanding the availability of COVID-19 testing through safe and accurate tests that may include home collection, and we are actively working with test developers on this goal.”Even so, FDA officials told ABC News the decision about how to expand testing — and whether new approaches using commercial testing kits or utilizing telemedicine — will be part of an ongoing discussion at the department of Health and Human Services, and in the White House.A number of companies have already seized on the FDA’s emergency authorization of the saliva test as an opportunity to expand testing options.Even without the option of conducting a test at home, these companies have promoted saliva testing as a safer option — and one that uses less of the much-needed protective gear — than the nasal swabs that have been widely used to test for the virus up until now.”Our goal is getting capacity to those front line health care workers,” said Justin Bellante, the CEO of BioIQ, an Atlanta-based company that is managing saliva testing through approved locations, like drive-up tents and community centers. “This is a method for freeing up capacity.”An attempt to use telemedicine to supervise testsEarlier this week, a company called Vault Health launched a commercial effort to offer saliva tests under a modified at-home approach that would have a health care professional supervise the sample collection by video conference, and have the sample shipped to the Rutgers lab for analysis. They began marketing the tests for $150 online.A Vault spokesperson said in a statement the company considered the approach to be “fundamentally different from what is often thought of as traditional ‘at-home’ collection because it is being supervised every step of the way by a medical professional, patients are not left to their own devices.”The FDA has yet to be moved — taking the step this week of updating its website to make the point clear it has not offered any at-home testing specifically “including self-collection of a specimen with or without the use of telemedicine.”Abdelmalek, the ABC News medical contributor, previously said some concerns about self-administered tests stem in part from the worry that the patient could make an error that leads to an incorrect outcome — and waste valuable testing resources in the process.But telemedicine advocates hope the FDA will eventually recognize the value in distributing at-home saliva kits far outweighs any drawbacks in the safety or reliability of those tests or the testing method.”The FDA has to have their rules for safety and there are reasons for those rules. But right now COVID is such a big problem that the idea that you could do a test from home would be huge,” said Crystal.”If the saliva tests perform well I see no reason why conducting them over telemedicine would not work well,” said Dr. John Brownstein, the chief innovation officer at Boston Children’s Hospital and an ABC News contributor. “If the testing is nuanced or less reliable, that’s where some of the concern with remote testing would come into play.”Brooks, for his part, downplayed any concerns with the premise of patients struggling with the complexity in administering a test from home.”This is just two minutes,” he said. “You spit in a tube, put the cap back on, and you’re on your way.” Copyright © 2020, ABC Audio. All rights reserved.