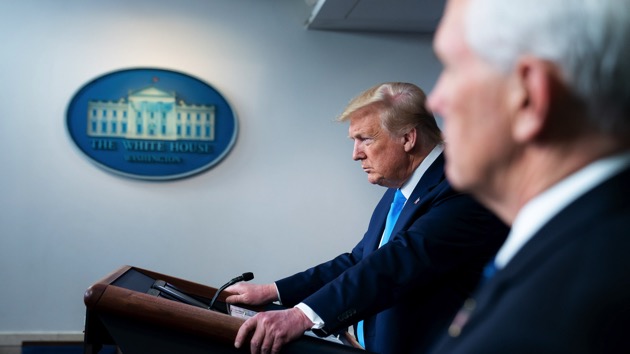 (WASHINGTON) — President Donald Trump heads into a new week stressing his effort to reopen the country after appearing to publicly rebuke his top expert on infectious disease, Dr. Anthony Fauci.Fauci said Sunday that the Trump administration “could have saved lives” had firm social distancing guidelines been enforced earlier, but there was “pushback about shutting things down.””We make a recommendation. Often, the recommendation is taken. Sometimes, it’s not,” Fauci told CNN Sunday, calling it a complicated decision. “It is what it is. We are where we are right now.”Trump retweeted a former Republican congressional candidate’s attack on Fauci, including the hashtag “#FireFauci,” amid a flurry of tweets Sunday night, as the president continues to reject any criticism of his response to the pandemic that has now killed more than 22,000 Americans.With the White House hoping to reopen parts of the country by May 1, and Trump set to announce as early as Tuesday what he’s called the “opening up the country council,” some experts, such as Fauci, have recommended a “rolling reentry” into normal lives, as the president weighs what he calls “the biggest decision of my life.”While Trump and many in his administration are eager to find ways to get Americans back to work, they’ll likely face some limitations, as several governors have already instituted stay-at-home orders through May.Here are the latest developments in the government response:‘#FireFauci’ follow up: White House says Trump takes suggestions of Fauci and Birx ABC News Chief White House Correspondent Jonathan Karl has asked the White House whether the president’s “#FireFauci” retweet was an indication he is sending Fauci a message — or if he no longer has confidence in him.A senior White House aide responded: “There has been three mitigation recommendations made to the President by his team of doctors and advisors. All recommendations have been met with immediate implementation orders and no ambiguity. Any suggestion that the President ignored Dr. Fauci or Dr. Birx’s mitigation plan is incorrect.”Trump says that his authority to open country overpowers governors’ ordersAfter repeating for weeks that the federal government is a “backup” to the states as the U.S. battles the coronavirus outbreak, President Donald Trump tweeted Monday morning that “for many good reasons” it is “the decision of the president” to reopen states, even if governors or local officials have their own conflicting orders in place.The president has repeatedly said that when it comes to personal protective equipment and ventilators, states should be responsible for procuring their own supplies, but he has not dictated whether states must enact stay-at-home orders or business closures. Most governors, instead, have taken matters into their own hands, with more than 40 enacting some form of stay-at-home order to date.Several of those local orders extend beyond the May 1 reopening that the White House is said to be eyeing.Supreme Court to teleconference oral arguments in May — including Trump financial records casesIn an unprecedented step, the United States Supreme Court will for the first time hear oral arguments by teleconference in May, seeking to resolve a number of urgent cases that include President Trump’s appeal of subpoenas seeking his financial records, amid the ongoing pandemic.The announcement confirms that justices will hand down several major decisions on politically-charged issues in time for the November presidential election.They will rule on whether the president must surrender his records to congressional and state investigators; whether states can require delegates to the Electoral College to cast ballots based on the popular vote; and whether the Obamacare contraceptive mandate is constitutional.The move to telephone conference is remarkable for a court steeped in tradition and famous for resisting pressure to use technology to make proceedings more accessible, ABC News’ Senior Washington Reporter Devin Dwyer reports.Sailor on coronavirus-stricken USS Theodore Roosevelt diesA sailor from the USS Theodore Roosevelt has died from COVID-19 complications on Monday, four days after he was admitted to an intensive care unit in Guam, the Navy said.The sailor, whose name has not been released, tested positive for COVID-19 on March 30. The sailor was taken off the ship and put at an isolation house at the naval base in Guam where he received medical checks twice a day, according to the Navy.The USS Theodore has remained in the news since last week’s resignation of Acting Navy Secretary Thomas Modly, who had dismissed the aircraft carrier’s captain Brett Crozier — calling him “stupid” or “naive” — after the leak of a memo in which he urged Navy officials to promptly evacuate the ship amid the coronavirus outbreak.There have been at least 585 confirmed infections among the crew.Copyright © 2020, ABC Audio. All rights reserved.