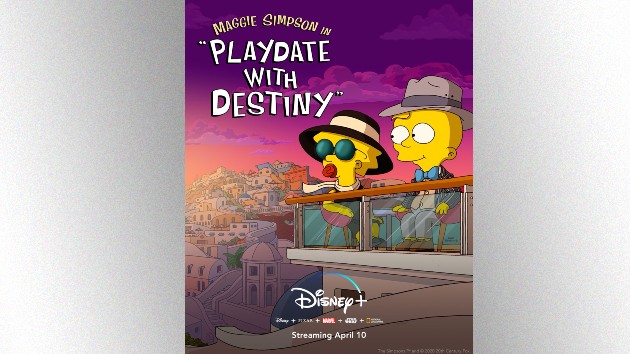 (LOS ANGELES) — A Simpsons short, Maggie Simpson in Playdate with Destiny, is coming to Disney+ Friday. The announcement was made by the record-breaking, Emmy-winning series’ creator Matt Groening himself, via a hand-written note on Instagram.

The short, he explained, ran ahead of the Disney/Pixar film Onward, which briefly ran in theaters before coming to the streaming service early, because of the COVID-19 situation.

The streaming service teases that the film centers on a day at the park that began like any other, “But when Maggie faces playground peril, a heroic young baby whisks her from danger — and steals her heart…” It adds, “Will fate (or Homer) get in her way?”

Calling it a “nifty little film,” Groening explained, “the response was so gratifying we wanted everyone to see it at home.”

He signed the note from “Your Pals,” including himself, the show’s producers, “& a buncha hard-working animators, man.”

The Maggie-centric short follows the 2012 Academy Award-nominated film, Maggie Simpson in The Longest Daycare,  which will also begin streaming on Disney+ later this month. The service also has all 30 seasons of the hit show, as well as The Simpsons Movie.

Lin-Manuel Miranda apologizes for how ‘In the Heights’ “fell short” in representing Afro-Latinx community
Woman sets another woman on fire in alleged attempted murder: Police
“The Bachelorette” recap: Katie lays down the law after learning some of the men may be playing her
Harris invites all female US senators to have dinner at Naval Observatory
Rudy Gobert named NBA Defensive Player Of The Year
Senate confirms Ketanji Brown Jackson to 2nd highest court in US