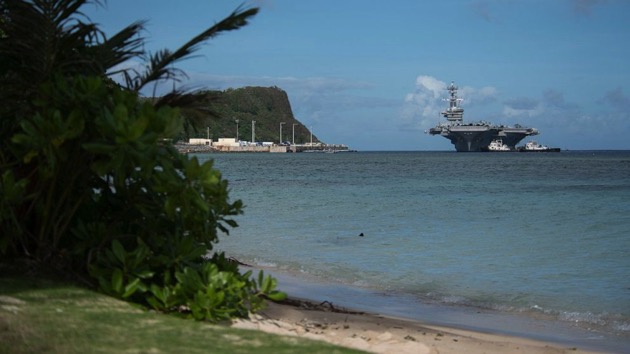 The aircraft carrier USS Theodore Roosevelt (CVN 71) transits Apra Harbor as the ship prepares to moor in Guam. Theodore Roosevelt Is in Guam for a port visit during their scheduled deployment to the Indo-Pacific. - (U.S. Navy)
Posted on April 9, 2020 by ABC News

(WASHINGTON) — A total of 416 sailors aboard the aircraft carrier USS Theodore Roosevelt have now tested positive for the novel coronavirus, with the numbers rising daily it appears that very soon 10 percent of the ship’s crew of 4,800 will have come down with the disease.The development comes as the vice chairman of the Joint Chiefs of Staff warned that the situation aboard the carrier was not “a one-off” and that the military needed to prepare for similar outbreaks throughout the military.Gen. John Hyten, the vice chairman of the Joint Chiefs of Staff told Pentagon reporters Thursday that the 416 crew members testing positive translated to 8.6 percent of the ship’s crew of 4,800 and with the numbers increasing daily, it is likely that the figure of 10 percent or more of the ship’s crew will be reached very soon.“We’ve tested almost the whole crew now, we still have about 1,000 tests left to report out,” said Hyten.Capt. Brett Crozier, the ship’s former captain, is reportedly among those who have tested positive for the virus according to the New York Times.Navy officials had characterized all of the COVID-19 cases among the ship’s crew as mild, with the majority being asymptomatic. But on Thursday the Navy confirmed the first case of a crew member requiring intensive care.“A U.S. Navy Sailor assigned to USS Theodore Roosevelt (CVN 71) was admitted to the Intensive Care Unit (ICU) of the U.S. Naval Hospital Guam April 9,” said a Navy statement.“The Sailor tested positive for COVID-19 on March 30 and at the time of hospitalization was in a 14-day isolation period on Naval Base Guam. More details will be released when they become available.”The sailor was found unresponsive Thursday morning while in isolation at Naval Base Guam, according to a U.S. official. Emergency personnel administered CPR and the sailor was transferred to the base hospital to be placed in ICU where the official the sailor is in critical condition.Gen. Hyten said the sailor was discovered by fellow sailors in quarantine, “this particular one happened from night to morning, but there were buddies around and the buddies found him.”The Navy plans to take 2,700 of the ship’s crew to place them in appropriate quarantine housing. The pace and the placement of the majority of the ship’s crew was the main request in Crozier’s letter that led to his firing by former acting Secretary of the Navy Thomas Modly.Modly resigned from his post on Tuesday following the firestorm of controversy generated by his remarks to the crew of the Roosevelt on Monday where he labeled Crozier as “too naïve or too stupid” to think that his letter would not have been leaked to the press.The round trip cost in operating expenses for Modly’s flight to Guam aboard a military aircraft was $243,000, a U.S. official confirmed to ABC News.Hyten said the military needs to plan for the possibility that there will be more coronavirus infections on the scale of the carrier throughout the military.“From my perspective, I think it’s not a good idea to think that the Theodore Roosevelt is a one of a kind issue,” said Hyten.“We have too many ships at sea, we have too many deployed capabilities. There’s 5,000 sailors on a nuclear powered aircraft carrier. To think that it will never happen again is not a good way to plan. What we do have to do is we have to figure out how to plan in these COVID environments.”Addressing press reports that some crew members assigned to the aircraft carrier USS Nimitz have tested positive for the virus a Navy spokesman clarified that there were no cases aboard the carrier which is currently pierside at its homeport of Bremerton, Washington.“There are no confirmed positive cases of COVID-19 on board USS Nimitz at this time,” said Commander John Fage, a spokesman for the Navy’s Third Fleet.“A sailor displayed symptoms, was placed into isolation off the ship out of an abundance of caution, and subsequently had testing that was inconclusive,’ he said. “ Sailors that had been in close contact with the individual were also removed from the ship as a precaution and placed into quarantine. That sailor remains off the ship.”Fage said a second sailor had tested positive while out of the state on leave in early March. “That sailor remains in that location and has not been to or aboard Nimitz since departing the area on leave,” he said. Copyright © 2020, ABC Audio. All rights reserved.

Why people are flouting coronavirus social distancing precautions that we know save lives
PA continues phased reopening with 16 more counties set to go green on June 5
Trump announces China sanctions over Hong Kong, termination of WHO relationship
The history of the phrase ‘when the looting starts, the shooting starts’ used by Trump
Julianne Hough and Brooks Laich announce separation after almost three years of marriage
‘Forbes’ strips Kylie Jenner of her billionaire title; Kylie hits back