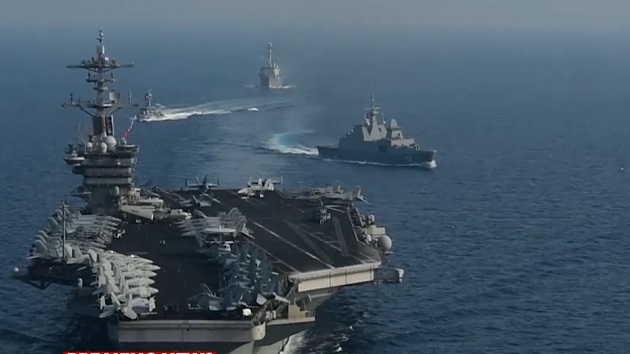 (WASHINGTON) — U.S. Air Force F-22’s intercepted a pair of Russian military aircraft that entered the Alaskan Air Defense Identification Zone (ADIZ) on Thursday according to North American Aerospace Defense Command (NORAD).”F-22 fighters, supported by KC-135 Stratotanker and E-3 AWACS aircraft from the North American Aerospace Defense Command intercepted two Russian IL-38 aircraft entering the Alaskan Air Defense Identification Zone on April 8th, 2020,” said a NORAD statement..The Russian aircraft were intercepted in the Bering Sea, north of the Aleutian Islands, and did not enter United States or Canadian sovereign airspace,” said the statement.U.S. territorial airspace begins 12 miles from the U.S. coastline, while the ADIZ is an air defense area that stretches for hundreds of miles from Alaska’s coastline where the U.S. and Canada require aircraft to identify themselves.”COVID-19 or not, NORAD continues actively watching for threats and defending the homelands 24 hours a day, 7 days a week, 365 days a year.,” said Gen. Terrence J. O’Shaughnessy, the NORAD commander. “This is the latest of several occasions in the past month in which we have intercepted Russian aircraft operating near Alaska and the approaches to our nations. We are and will continue executing our no-fail homeland defense missions with the same capability and capacity we always bring to the fight.”The incident marked the latest encounter between Russian military aircraft and American forces that occur around the world. While the air encounters off the coast of Alaska are typically routine affairs, the same cannot be said for other close calls around the world.In January, Russian military spy ship came within 60 yards of the destroyer USS Farragut narrowly avoiding a collision in the North Arabian Sea. At the time the Navy’s 5th Fleet said the Russian ship had “aggressively approached” the American destroyer and ignored warnings not to approach before it finally veered away.In response, the Farragut “sounded five short blasts, the international maritime signal for danger of a collision, and requested the Russian ship alter course in accordance with international rules of the road,” 5th Fleet said in a statement.The Russian ship “initially refused” but then “ultimately altered course,” allowing the two ships to separate and narrowly avoid collision.January’s incident echoed another close call last June when a Russian destroyer sailed 50 to 100 feet from a U.S. Navy guided-missile cruiser. The USS Chancellorsville was operating in the Philippine Sea when the Russian ship “maneuvered from behind and to the right of the Chancellorsville, accelerated, and closed to an unsafe distance” of between 50 and 100 feet, the U.S. Navy’s Seventh Fleet said in a statement at the time.”This unsafe action forced Chancellorsville to execute all engines back full and to maneuver to avoid collision,” the statement continued.The U.S. Navy characterized the Russian ship’s actions as “unsafe” — the term typically used by the U.S. military to describe risky close calls experienced by its ships and aircraft in international waters and airspace.With American military ships and planes conducting regular operations worldwide, there is always a chance for close encounters with the Russian military, which also operates globally.How often do those types of unsafe interactions occur?Not often, but when they do, they gain a lot of attention. If the incidents are deemed dangerous enough, the U.S. will file a formal diplomatic complaint with Moscow, called a démarche, but in the end, all that usually happens is that the U.S. military issues statements reaffirming its right to sail or fly through international waters and airspace.U.S. officials believe Russia’s close encounters with the U.S. military are prompted by Russia’s effort to reassert itself militarily around its borders.In recent years, many of the closest encounters have been in the Baltic Sea and the Black Sea, involving Russian military aircraft buzzing American ships and flying too close to American planes.Last summer, a U.S. P-8A Poseidon reconnaissance aircraft experienced an “unsafe” and “irresponsible” intercept by a Russian fighter over international waters above the Mediterranean Sea.In late May, U.S. Air Force F-22 fighters intercepted Russian aircraft that had entered the Alaska Air Defense Identification Zone (ADIZ) for the second day in a row.Russia isn’t the only nation with which the U.S. military has had these close encounters.In October, there was a particularly notable incident between the USS Decatur and a Chinese warship in the South China Sea. The Chinese ship sailed within 135 feet of the Decatur’s bow, similarly prompting the American ship to take evasive maneuvers to avoid collision.

Trump appoints Conair heir who promoted conspiracy theories to head US consulate in Bermuda
Lake of the Ozarks Memorial Day partygoer tests positive for COVID-19
Veterinarian, a COVID-19 survivor, on trying to care for pets, her staff and herself
Wife of Derek Chauvin, officer charged with murder in George Floyd’s death, files for divorce
George Floyd remembered by friends and family as hardworking ‘gentle giant’
The history of the phrase ‘when the looting starts, the shooting starts’ used by Trump