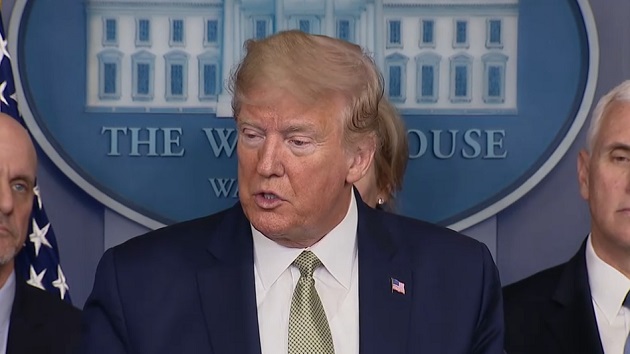 (WASHINGTON) — President Donald Trump repeated Tuesday that he has asked U.S. drug companies to recommend what he called “possible cures” to doctors treating British Prime Minister Boris Johnson, currently battling the novel coronavirus in an intensive care unit in London.“We had (the drug companies) contact his doctors at the hospital in London, and they’re talking right now,” Trump told Fox News Tuesday night. Trump has recently held a meeting with drug company CEOs.Talking to Sean Hannity, the president called himself a “matchmaker,” putting people with “potential cures” in touch with Johnson’s doctors.“I have set people up with his doctors in London and these are people … are amazingly accomplished people that have found the answer to other things that were equally as tough,” he said.However, Trump denied that one of the treatments recommended for Johnson was hydroxychloroquine, the anti-malarial drug he repeatedly touts as a possible “game-changer” in dealing with COVID-19.“Two other (potential drugs) out there, very, very high-level and they’ve shown very good promise. So we have them talking to the doctors to see whether or not it would work,” he said Tuesday.“Johnson & Johnson and others are getting close on a vaccine, but it takes a while to test it, as you can imagine,” Trump said.Diagnosed with the novel coronavirus on March 27, Johnson was hospitalized at St. Thomas’ Hospital in London on April 5 before moving to the ICU the next day. Trump called the prime minister’s hospitalization “a bad sign.”“When they bring you to the hospital with this one, this is not having your appendix taken out. It’s a bad — that’s a bad thing,” he added.Trump and Johnson have maintained friendly ties since the prime minister assumed power in July. The president is reportedly so fond of his British counterpart that he gave Johnson his personal cell phone number last year.“Maybe 10 days ago or so and we talked and he didn’t sound good at all,” Trump said. Despite denying companies had recommended hydroxychloroquine for Johnson, the president continued to promote the drug’s potential in his interview with Hannity.“(Hydroxychloroquine) seems to be, with the azithromycin — that really seems to be the combination that’s great,” he claimed. “But the combination has been pretty amazing,” he claimed, without providing any evidence. While the drug is undergoing trials in New York and elsewhere, top medical experts like Dr. Anthony Fauci, the nation’s top infectious disease expert, has cautioned that any evidence so far is anecdotal.At coronavirus task force press conferences on Monday and Tuesday, Trump told reporters that he had contacted drug companies to make sure the U.K. prime minister’s doctors would “have everything with them should it be needed.”Since Johnson’s hospitalization, the U.K. Foreign Secretary Dominic Raab has been asked to deputize for the prime minister while he battles the illness.Johnson’s partner, Carrie Symonds, who is pregnant with their child, also announced that she had been bed-ridden over the past week with coronavirus symptoms over the weekend.‘The Prime Minister remains clinically stable and is responding to treatment. He continues to be cared for in intensive care at St Thomas’ hospital. He is in good spirits,” Johnson’s spokesperson said Wednesday.As of Wednesday morning, 60,733 people in the U.K. had tested positive for coronavirus, with 7,097 deaths, according to the Department of Health and Social Care.The Daily Mail reports that the the prime minister’s office thanked Trump for his offer of coronavirus treatment and said officials are in ‘constant contact’ with the White House.ABC has reached out to the prime minister’s office for comment.