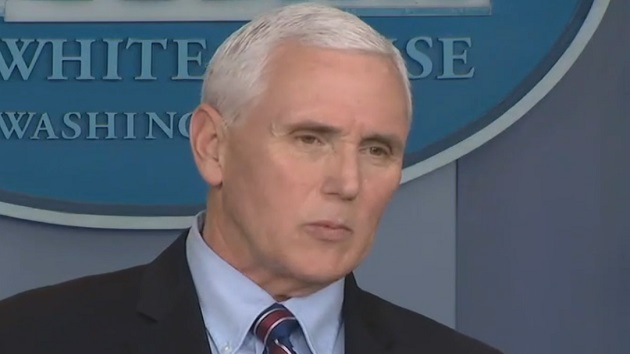 (WASHINGTON) — President Donald Trump had already sparred with reporters for more than an hour-and-a-half Monday evening, during his now daily update on his administration’s battle with the coronavirus pandemic, when he handed the reins over to Vice President Pence, waiting patiently nearby.“Ladies and gentlemen, thank you very much. I’m going to let our vice president take over,” Trump said, ducking out of the press briefing, leaving Pence to explain more about how the White House is dealing with the crisis.It was six weeks ago that the president, facing criticism that the government’s response was slow and chaotic, tapped Pence to assume leadership of the task force. At the time, the president was still bragging about the low number of documented cases in the U.S. and professing that the virus would “disappear,” saying it would be “like a miracle.” Every day since, the vice president has been at the helm, managing the non-stop operations involved in the U.S. effort, the nation’s biggest public health crisis in a century.While the president has lavished praise on Pence for the job he’s doing, the vice president never fails to quickly credit the president’s “leadership.” A source familiar with their working relationship says they are in touch multiple times a day.“The vice president is nothing but the president’s best staffer,” a senior administration official said in describing Pence’s dedication to carrying out the president’s directives.Still, while the president has largely commandeered the daily briefings before the cameras, behind the scenes it is Pence who chairs the daily task force meetings in the Situation Room. The president has attended only some of the sessions, which run an hour-and-a-half on average, according to a senior official.The vice president also is fielding calls from governors and task force members from the early morning hours until late in the night, the official said, and holding back-to-back meetings throughout the day with various stakeholders and affected industries.Pence’s singular focus has earned him the president’s particular admiration, with Trump declaring on Monday that Pence has done “an unbelievable job.”“He’s done much better than well. And he gets along with people. I think much better than I do,” Trump said in a rare moment of public self-reflection.Unlike Trump, who seems to relish fighting with reporters, Pence calmly answers their questions. In his trademark reassuring voice, he offers empathy, and often, prayers.But even as he earned the president’s praise, Pence is careful never to assume credit directly and consistently attributes anything positive to the president’s decision-making prowess. His actions are “at the president’s direction” and under “the president’s leadership.”Beyond Pence’s diplomatic approach in giving credit to the president, Pence is himself a former governor and has particularly impressed the president with his deft touch in dealing with governors, even those who have criticized the administration’s response.“I like people being — Mike can put up with things that — sometimes I say it’s amazing that he can put up with it. But he’s done an incredible job,” Trump has said.Trump has expressed disdain for governors who have been publicly critical of the administration response, saying they should “be appreciative,” and has expressed particular disdain for Gov. Jay Inslee of Washington, calling him a “nasty person.”“I don’t have to call because I’m probably better off not, because we don’t get — he’s a failed presidential candidate. He’s a nasty person,” Trump said of Inslee on March 29. ” I don’t like the governor of Washington. So you know who calls? I get Mike Pence to call.” (Pence knows Inslee from when they served in the House together.)There’s a good cop-bad cop dynamic at play, according to an administration official, who said the differing styles serve to complement one another and acknowledged that the approach is not free of political calculations.“At the end of the day, these people are still going to run on this in six to eight months,” the official said.While the president may rant against a particular governor in public comments, the official said, if a state with a critical governor is “in need of ventilators, the federal government is going to get them the ventilators.”When the president strikes a combative tone in public, the vice president follows up — oftentimes in private — with a reassuring message.When the New York health care workers raised alarm bells last week about shortages in critical protective gear needed to protect them on the front lines in treating patients, President Trump raised questions about whether the gear was slipping out the back door.“That statement was made that they’ve been delivering for years, 10 to 20,000 masks,” Trump said. “Okay, it’s a New York hospital. Very — it’s packed all the time. How do you go from 10 to 20, to 300,000? 10 to 20,000 masks to 300,000?”Vice President Pence followed up several days later with a message directed at the state’s health care workers.“Help is on the way,” Pence said on the day it was announced that the federal government was sending an additional supply of 200 thousand N95 masks to New York.

Why people are flouting coronavirus social distancing precautions that we know save lives
PA continues phased reopening with 16 more counties set to go green on June 5
The history of the phrase ‘when the looting starts, the shooting starts’ used by Trump
Rapper G Herbo opens up about PTSD to address ‘mental illness war zone’ in Chicago
Cancelled FastPass and dining reservations: What to know about the Disney reopening
‘Fuller House’ star Candace Cameron Bure teases “many surprise faces” in final episodes