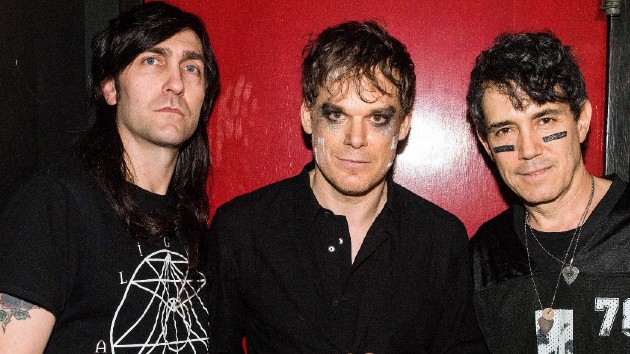 The former Dexter star fronts a new band called Princess Goes to the Butterfly Museum. The group also features keyboardist Matt Katz-Bohen and drummer Peter Yanowitz, both of whom Hall met while working on a Broadway production of the musical Hedwig and the Angry Inch.

The result of the collaboration is the self-titled debut Princess Goes to the Butterfly Museum EP, a collection of dance jams that combines Hall’s theatricality, the twinkling keyboards of Katz-Bohen — who currently plays in Blondie and has worked with Boy George and Cyndi Lauper — and the Swiss Army knife-drumming style of Yanowitz, who’s played with everyone from Yoko Ono and Allen Ginsberg to The Wallflowers and Andrew W.K.

“We didn’t really have any rules,” Katz-Bohen tells ABC Audio. “It was just sort of the sum total of everything we’d experienced as musicians.”

Hall has long been involved with musical theater — in addition to his leading role in Hedwig, he also starred in the David Bowie musical, Lazarus — but Princess marks the first artistic project he can truly call his own. That, he explains, is the biggest difference between acting and playing in a band.

“It’s something that the three of us have created,” Hall says. “We’re sharing, not our interpretation of someone else’s work — we’re not breathing life into somebody else’s words or music — we’re actually sharing what emerged from us. So there’s a sense of ownership.”

Hall adds that he doesn’t prefer either playing music or acting, he just doesn’t want to be “bound to just one way of expressing yourself.”

“I’d prefer to just continue to mix it up,” he says.

The Princess Goes to the Butterfly Museum EP is out now.