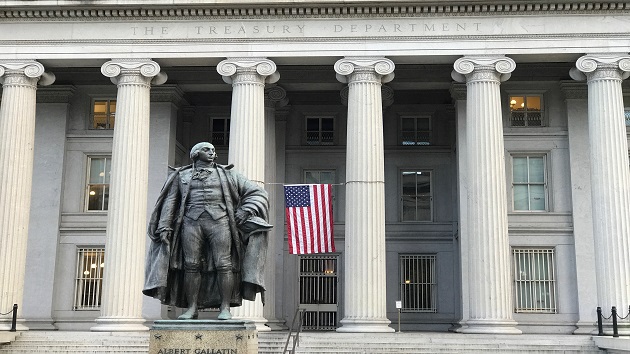 (WASHINGTON) — The Treasury Department on Tuesday asked Congress for $250 billion in additional funding for small business loans, a key part of the stimulus package passed last month aimed at keeping the economy afloat during the coronavirus crisis.President Donald Trump said administration officials were “in talks” with congressional leaders to secure more funding for the $350 billion program, which is already running out of money despite having started just on Friday. The loans are designed to be quickly forgiven if owners use the money to keep workers on the payroll instead of laying them off.”We just asked Congress to pass legislation to fund an additional $250 billion dollars for Paycheck Protection Program,” Trump said at the White House, where he was hosting a video teleconference with the nation’s top CEOs and members of his administration, including Treasury Secretary Steven Mnuchin.”The way it’s going, we’re going to need that, because it’s really going. People are loving it. They’re really loving it,” Trump said about the program.The $250 billion proposed addition to the program would be more than 70% of the initial investment of $350 billion, a large portion of the $2 trillion the government put into the latest stimulus effort. Mnuchin announced that he’d spoken to the president and leaders of both parties to secure the request earlier on Tuesday, just four days after the program began with multiple problems.At the event at the White House Tuesday afternoon, Mnuchin said he’d urged them all to pass the $250 billion in the Senate by Thursday and the House by Friday.“I had the opportunity this morning to speak to Mitch McConnell, Chuck Schumer, Nancy Pelosi, and Kevin McCarthy. I urged them at the president’s request that they get us another $250 billion approved, and we look forward to the Senate passing that on Thursday and the House passing that on Friday. This is much needed support ,and we want to make sure that every single small business can participate, and we want to assure the workers that if you don’t get the loan this week, there’ll be plenty of money for you next week,” Mnuchin said.On Monday, Trump pledged an immediate “refill” if the program ran dry and said “we’re already preparing because it’s going so fast for the small businesses and their employees.” Republicans were quick to offer their support for Mnuchin’s impending request, which Senate Majority Leader McConnell said he will work to get passed by Thursday. House Minority Leader Kevin McCarthy, who said he spoke to Mnuchin Tuesday morning, urged House Leader Nancy Pelosi to also move “swiftly” to pass the funds.Pelosi, however, didn’t see the same need to rush forward in a CNN interview earlier Tuesday afternoon. Before allocating hundreds of billions more to the loan program, she wanted to be sure the payments were being dolled out equitably, Pelosi said.”We have no data though, we don’t know so much about who’s being served or who’s being underserved,” Pelosi said. “And so when the secretary called this morning to ask for the additional funds, we want to make sure they are administered in a way that does not solidify inequality and how people have access to capital and instead benefits everyone who qualifies for it. We will have certain considerations if we were to go forward with that,” Pelosi said. Republican Sen. Marco Rubio of Florida, chairman of the Senate Small Business Committee, also expected the request to come on Tuesday and said his office was working with Senate leadership to move the funds through as “quickly as possible,” according to an aide.The Paycheck Protection Program, created under the stimulus package, offers desperate small business owners federally-backed loans that will be essentially forgiven if the money is used to keep employees on payroll and go toward other overhead operating expenses.But the program hasn’t worked as planned, plagued by unprepared banks who said they had just hours to get a $350 billion system up and running. Small business owners also reported quick rejections from banks if they didn’t already have an existing loan out.Patrick Slaughter, who owns a law firm in Tennessee, was rejected for his Paycheck Protection Program loan just hours after he applied. Slaughter told ABC News he has a business credit card and business checking with Bank of America, but has never needed to apply for a business loan.Instead, he said, Bank of America offered him a conventional loan or a credit card.”They are purposefully denying us this Paycheck Protection Program opportunity so they can profit by selling us their loans,” Slaughter said.A spokesperson for Bank of America said small business owners who had already borrowed from the bank were easier to get through the system, which requires speed.”We know for these businesses speed is of the essence. We can move fastest with our nearly 1 million small business borrowing clients. That is our near term priority. As the administration has made clear going to your current lending bank is the fastest route to completion,” said Bank of America spokesperson Ball Haldin. Despite the complications, the president on Monday continued to defend the program’s success, calling the issues “minor glitches,” describing Bank of America as a “leader” and lashing out at a reporter who asked about the program’s “confusing start.””I wish you’d ask the question differently. Why don’t you say, ‘it’s gotten off to a tremendous start, but there are some little glitches,’ which by the way have been worked out?” Trump said, speaking to the press at the daily coronavirus task force briefing.According to the president’s top economic adviser Larry Kudlow, $50 billion of small business loans were processed as of Tuesday morning, up $12 million from the day before.”It’s really been performing well,” the president said on Monday. “Couple of little glitches, minor glitches that have already been taken care of, or they say. These funds will result in nearly two million jobs being preserved so we’re taking care of our workers — small businesses and our workers,” Trump said.