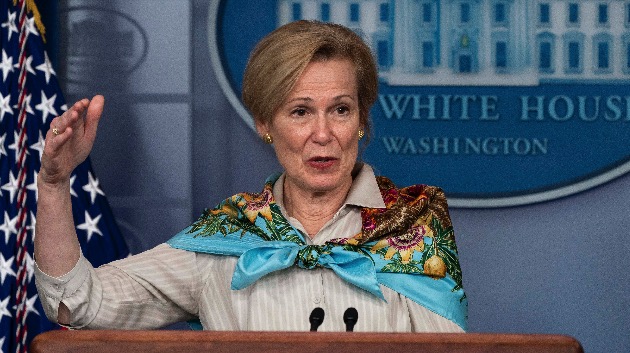 (WASHINGTON) — White House coronavirus task force coordinator Dr. Deborah Birx knows how tough the social distancing guidelines can be, revealing one “sacrifice” on Monday that, she says, has personally challenged her.Birx said she opted out of visiting her granddaughter over the weekend, despite the 10-month-old having “a fever of 105″ and Birx feeling a responsibility as the doctor of the family — calling it an illustration of the sacrifices everyone must also take to slow the spread of COVID-19.”We need to take care of each other now as Americans and do everything that’s in those guidelines. And I know they’re tough. I know incredibly how tough they are,” Birx said at Monday’s briefing. “My grandchild of 10 months got a fever of 105 this weekend. I’m the doctor. And I couldn’t get there.””I was trying to explain to my daughter how to listen to her lungs — how to listen to her lungs and the baby’s,” Birx continued, before the president interjected.”But you did not get there, you did not get there?” he asked.”I did not go there,” Birx emphasized.”Good, I’m very happy with that,” Trump said.”Because of you two,” she quickly reminded, gesturing to the president, who is 73, and the vice president, who is 60, both standing within a few feet of her. “You can’t take that kind of risk with the leaders of the country.”

Dr. Deborah Birx says COVID-19 is a “highly transmittable virus” and families should “consolidate“ trips to grocery stores and pharmacies and make the trip “maybe once every two weeks.”“The entire family doesn’t need to go out on these occasions.” https://t.co/VtpJpK2F6g pic.twitter.com/p57aPRCWNC

Trump then mistakenly asked Birx if her “grandson” was okay, and after she corrected him that it actually was her granddaughter, she added, to the relief of many, that the infant is now “coming out of it.””That’s a lot of temperature, 105,” the president said.Birx later said she probably had roseola, a common viral illness in young children, not COVID-19.”Babies can do that, but it’s very scary, especially when I couldn’t assure myself that she was fine,” Birx, who is 64, added. “It was just sleepless nights for me and them as they kept her fever down.”She also emphasized that her family has been diligently self-isolating “because there’s too much precious cargo inside the house,” explaining that her elderly parents live in the same home as her daughter and young granddaughters.Monday was not the first time Birx has spoken of avoiding her younger grandchildren amid the pandemic.”All of us have made sacrifices. I haven’t seen my grandchildren in three weeks. I know other people are like that — that they have really made those personal sacrifices,” she said at another briefing two weeks ago.Birx, who meets daily with the president and vice president, is a prominent face in the government’s response to the novel virus alongside Dr. Anthony Fauci, the nation’s top expert of infectious diseases and director at the National Institutes of Health.The two have become nearly synonymous with the science and medicine behind the administration’s briefings. One is also known for trademark silk scarves.Before she was detailed to the White House coronavirus task force, Birx led the government response in the fight against HIV/AIDS globally, a role held since 2014.Seeking to clarify advice she gave over the weekend, Birx also suggested on Monday that Americans in hot spot areas try to skip their trips to the pharmacy or grocery store at the height of the crisis and instead go once every two weeks, shopping for the entire family, so as to reduce their time out and about.”If you can send one person, the entire family doesn’t need to go out on these occasions,” Birx said, reminding that coronavirus is “highly transmissible” and that social distancing should also be done “out of respect” to health care workers.Anecdotes like the one Birx shared of her grandchild add to the consistent messaging that she and Fauci have modeled for weeks: to take the pandemic seriously.”I know you all are making sacrifices, and I guess I want everyone to take this seriously,” she added.Birx and Fauci also reported some relatively good news amid the crisis on Monday, saying that social distancing appears to be helping to level the curve, at least in some places.Fauci cautioned against “claiming victory prematurely” but said that early modeling continually shows it is “our best and only great public health tool.”

“If we do it right, you’re going to see those [states] who have not peaked, will not peak,” Dr. Anthony Fauci tells @jonkarl, emphasizing the importance of mitigation in fighting COVID-19. https://t.co/bV7kkGmZSK pic.twitter.com/BHUT2TyPo5

“Governor Cuomo reported that the number of hospitalizations, the number of admissions to intensive care and requirements for intubations over the last three days have actually started to level off,” Fauci said Monday. “So everybody who knows me knows I’m conservative about making projections — but those are the kind of good signs that you look for.””That’s the first thing you see when you start to see the turnaround,” Fauci added. “Despite all the suffering and the death that has occurred, what we have been doing has been working.”