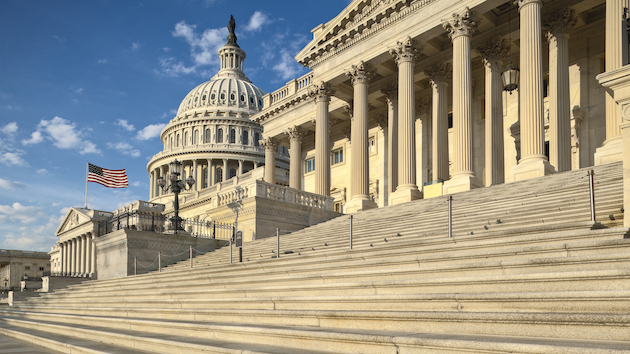 (WASHINGTON) — President Donald Trump fired the Inspector General of the Intelligence Community, Michael Atkinson, Friday, saying he no longer had confidence in him. His termination quickly drew the ire of top Democrats.

Atkinson was the intelligence community inspector general whose communications to Congress about a whistleblower complaint helped initiate the Ukraine impeachment inquiry against the president.

“As is the case with regard to other positions where I, as President, have the power of appointment, by and with the advice and doesn’t of the Senate, it is vital that I have the fuller confidence in the appointees serving as Inspectors General,” Trump said in a letter Friday announcing Atkinson’s termination. “That is no longer the case with regard to this Inspector General.”

Speaker of the House Nancy Pelosi, senior Democrats and other Inspectors General defended Atkinson while others in Washington questioned the timing of Trump’s decision.

“In the midst of a national emergency, it is unconscionable that the President is once again attempting to undermine the integrity of the intelligence community by firing yet another an intelligence official simply for doing his job,” Virginia Sen. Mark Warner, who is also Vice Chairman of the Senate Select Committee on Intelligence, said in a statement Friday.

Michael Horowitz, Chair of the Council of the Inspectors General on Integrity and Efficiency and the Inspector General at the Department of Justice, issued a statement early Saturday morning, complimenting Atkinson’s career.

“Inspector General Atkinson is known throughout the Inspector General community for his integrity, professionalism, and commitment to the rule of law and independent oversight,” Horowitz said in a statement. “That includes his actions in handling the Ukraine whistleblower complaint.”

Without mentioning Trump, Horowitz said the inspector general community would continue to “conduct aggressive, independent oversight of the agencies that we oversee.”

“This retribution against a distinguished public servant for doing his job and informing Congress of an urgent and credible whistleblower complaint is a direct affront to the entire inspector general system,” House Intel Chairman Adam Schiff said in a statement Friday night.

Pelosi called Atkinsons’ dismissal “shameful,” saying his firing will have a chilling effect against whistleblowers.

“The shameful late-night firing of Inspector General Atkinson is a brazen act against a patriotic public servant who has honorably performed his duty to protect the Constitution and our national security, as required by the law and by his oath,” Pelosi said in a statement.

All of Biden’s executive orders, and other notable actions, so far
Health care worker and mother of 2 loses home in fire, now her colleagues are stepping in
3 teens arrested in mysterious Colorado arson that killed 5 members of Senegalese family
Cloris Leachman, Oscar and Emmy winning star of ‘The Mary Tyler Moore Show’, dead at 94
DHS uses federal alert system for first time in a year to warn of domestic terrorist threat
Neon movie studio releases first image of Kristen Stewart as Princess Di in ‘Spencer’