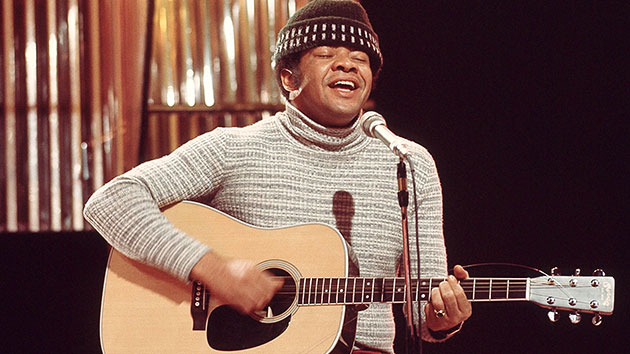 (NEW YORK) — Bill Withers, whose soulful hits such as “Lean on Me” and “Ain’t No Sunshine” earned him induction into the Rock and Roll Hall of Fame, has died of heart complications, his family said in a statement reported by Rolling Stone. He was 81.

Born in West Virginia, Withers served in the Navy, then moved to L.A. in 1967.  His debut album, Just As I Am, produced by the legendary Booker T. Jones and featuring guitar by Stephen Stills, included the Grammy-winning hit “Ain’t No Sunshine” and the classic “Grandma’s Hands.”  The album cover showed Withers at his day job at an aircraft company — a job he initially refused to quit because he felt the music business was too unstable.

Withers’ second album, Still Bill, included his enduring signature song, “Lean on Me,” as well as the funky “Use Me.” He continued releasing albums throughout the seventies, and in the ’80s he did a number of collaborations, including the 1981 Grammy-winning hit “Just the Two of Us” with Grover Washington, Jr.

Ongoing issues with his record company led Withers to effectively retire from recording after 1985, though remixes and covers of his songs continued to be released, not in the least Club Nouveau‘s 1987 number-one version of “Lean on Me,” which won Withers his third Grammy, for Best R&B song.

Withers’ songs have also been widely sampled: a portion of “Grandma’s Hands” was used in the 1996 Grammy-winning #1 hit “No Diggity,” by BLACKstreet.  JAY-Z, Kanye West, Tupac and DMX have also sampled Withers’ songs.  In 1999, the use of “Lovely Day” in a GAP commercial also renewed interest in Withers’ music, as did the inclusion of “Use Me” in filmmaker Oliver Stone’s football drama Any Given Sunday that same year.