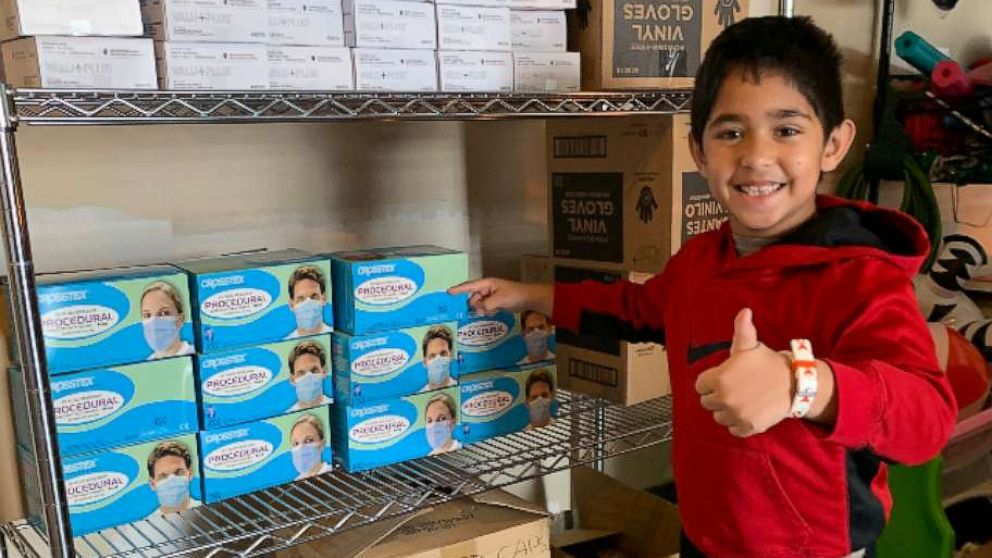 Courtesy of Isma Zubair
Posted on April 3, 2020 by ABC News

(ASHBURN, Va.) — A 7-year-old in Virginia has found a special way to show his appreciation to the hospital workers fighting on the front lines to save patients from COVID-19.Zohaib Begg of Ashburn, Virginia, said he gained his strong sense of respect and admiration for doctors and nurses when he spent years in Inova Fairfax Hospital as a younger child. That feeling never went away.So when the second grader asked his mother what they could do to help hospital workers fighting the deadly coronavirus pandemic, she helped him start calling around.”My first mission was to help the hospital and sew masks, but I didn’t know how to sew,” he told Washington, D.C., ABC affiliate WJLA.He said he learned that some hospitals were running short on headgear.”I thought they could use shower caps — and I knew that they were at hotels,” he said.First, he collected shower caps from the hotels, but it turned out that the hotels also had gloves and face masks to donate. Zohaib was able to collect more than 6,000 caps, masks and gloves.The hefty total even got him a nod from former President Barack Obama.His mother, Isma Zubair, told ABC News on Friday that Zohaib has a “heart of gold” and that he was always thinking others.”President Obama’s tweet was a huge surprise,” she said. “We are honored he chose to mention Zohaib’s work. We hope it inspires others that you’re never too small to make a difference.”She said that the family had even heard from people in France, Chile and Asia about how Zohaib’s act of kindness had brought a smile to their faces during this difficult time.”We can no longer collect due to stay-at-home orders, but we continue to get calls of supplies and will be relaying back to hospitals or nursing homes in need,” Zubair said.Not only did Zohaib help some hospital workers in desperate need of protective equipment, he also shared that he’d completed a personal goal he’d set for himself.”My third mission was to beat the National Cathedral which gave 5,000 PPEs — and I gave 6,009 PPEs,” he said.”The hospitals are very happy,” he said.Copyright © 2020, ABC Audio. All rights reserved.