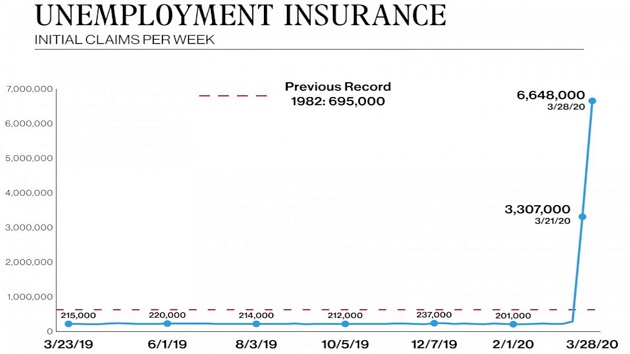 ABC News Illustration / US Department of Labor
Posted on April 2, 2020 by ABC News

(NEW YORK) — The coronavirus pandemic has quickly evolved from a health crisis to a financial one, shuttering businesses, upending entire industries and sending financial markets reeling.Here’s the latest news on how the COVID-19 crisis is affecting the economy. For more on financial resources available during the pandemic, click here.Financial markets rise with oil pricesDespite the staggering unemployment filings figure released earlier in the day, U.S. financial markets rallied as oil prices soared.The Dow Jones Industrial Average closed up more than 450 points, or 2.2%. The S&P 500 climbed 2.3% and the Nasdaq rose 1.7%.The best performers for the Dow Thursday were energy giants Chevron and Exxon Mobil, which saw gains of approximately 11% and 7%, respectively.Oil prices spike after Trump says Saudi Arabia and Russia will end price warPresident Donald Trump tweeted Thursday morning that he spoke to his “friend” Mohammad Bin Salman Al Saud, the crown prince of Saudi Arabia, expressing confidence that Saudi Arabia and Russia will be taking action to temper their ongoing oil price war.Trump said the prince spoke with Russian President Vladimir Putin and agreed to cut back oil production by at least 10 million barrels.Shortly after Trump’s tweet, however, a spokesperson for Putin denied that he spoke to the Saudi crown prince.Still, prices for Brent crude oil, the global benchmark, spiked more than 23% on Thursday. West Texas Intermediate crude oil, the U.S. benchmark, similarly jumped more than 24%. Amazon announces temperature checks, more safety measures for employeesAmazon announced Thursday a series of new safety measures for its employees.The company said it would check the temperature of all staff when they arrived at work and employees with a temperature over 100.4 degrees Fahrenheit would be sent home.Moreover, Amazon said it would increase the supply of personal protective equipment as well as disinfectant wipes and hand sanitizer. Daily audits of its new health and safety measures would also be conducted.The announcement comes just days after a group of workers at an Amazon warehouse in New York City walked off the job and went on strike Monday, demanding the company shut down and thoroughly clean the sprawling facility after they say multiple employees there have tested positive for the novel coronavirus.6.6 million Americans file for unemploymentA record-smashing 6,648,000 people filed for unemployment in the week ending March 28 amid the novel coronavirus pandemic, according to data released by the U.S. Department of Labor on Thursday.The COVID-19 financial crisis has clobbered the U.S. economy, forcing thousands of businesses to shutter amid government-mandated stay-in-place orders.The service industry, led by accommodation and food services, was among the hardest-hit by the COVID-19 outbreak, according to the DOL data. Other industries that have been heavily impacted include health care/social assistance, manufacturing, retail and construction, the DOL said.Friday’s staggering figure is an increase of more than 3 million from the previous record — which was just released last week — that showed the first labor impacts of the outbreak in the U.S.Just a few months ago, prior to the COVID-19 outbreak, the unemployment rate in the U.S. was near a 50-year low. Copyright © 2020, ABC Audio. All rights reserved.

Allyson Felix qualifies for fifth Olympics, celebrates with her 2-year-old daughter on the track
‘The Hitman’s Wife’s Bodyguard’ overtakes ‘A Quiet Place Part II’ with $11.7 million debut
Shootings at graduation parties reminder of gun violence ‘epidemic’ for students, advocates
76ers Embiid fined for Game 6 altercation
Walmart Deals for Days starts today. Here’s what you can shop now
Arizona shooting spree suspect thought people were after him for prior shooting: Police