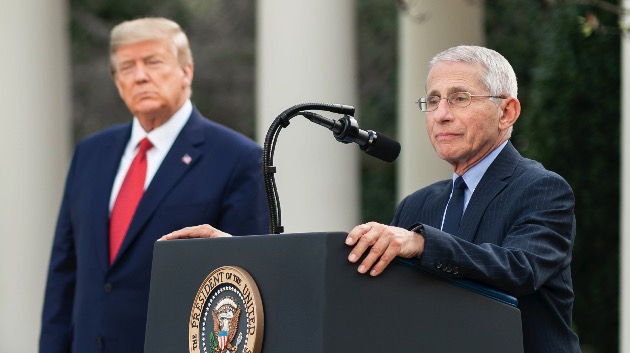 (WASHINGTON) — As the White House coronavirus task force continues to debate whether to officially revise the Center for Disease Control guidelines on wearing masks, President Donald Trump now has informally endorsed the idea — backing Americans wearing face coverings when going out in public.”It’s not a bad idea, at least for a period of time” to cover your face when going out in public,” Trump said at his White House briefing Tuesday evening, suggesting Americans wear a scarf as an alternative.”You can use a scarf, a lot of people have scarves and you can use a scarf. A scarf would be very good. My feeling is if people want to do it there’s certainly no harm to it. I would say do it. Use a scarf if you want rather than going out and getting a mask,” he said.There is apparent confusion about whether Americans should be wearing masks as a general prophylactic measure. Right now, the message from places like the World Health Organization and Centers for Disease Control and Prevention is that you need one only if you are sick or caring for the sick.As the situation and understanding of the virus has evolved, the task force has seen cases of unknown origin and studied the community spread where there is no known nexus to travel. They’ve also seen recent studies that the virus seems to be able stay alive in aerosolized form — linger in the air — in limited scenarios.The debate over how to formally advise Americans of any change is fluid, but sources tell ABC News there is a general agreement inside the task force that face coverings should be recommended.Any guidance is likely to recommend avoiding the use of those N95 medical masks that hospitals across the country so desperately need. The CDC has been having informal conversations about the issue over the past week, and one idea floated was recommending the use of masks inside nursing homes, according to sources.The presidents comments — and those from health experts in recent days — illustrate a change in tune from officials who had previously advised against wearings masks out in public.”CDC does not recommend that people who are well wear a facemask to protect themselves from respiratory illness, including COVID-19. You should only wear a mask if a healthcare professional recommends it. A facemask should be used by people who have COVID-19 and are showing symptoms,” the current guidelines on masks say.Dr. Anthony Fauci said on the CBS program 60 Minutes on March 8 that “there’s no reason to be walking around with a mask” adding that the risk could actually be higher because people touch their faces more. And Surgeon General Jerome Adams and Vice President Pence have said the same. “The average American does not need to go out and buy a mask,” Pence said Feb. 29.Officials have also expressed concerned that recommending wearing masks could take away resources from hospital workers and have stayed consistent about the need to conserve resources for those workers, which was clearly part of the impetus for telling people not to buy masks.”The thing that has inhibited that a bit is to make sure we — that we don’t take away the supply of masks from the health care workers who need them. But when we get in a situation where we have enough masks, I believe there will be some very serious consideration about more broadening this recommendation of using masks,” Fauci said on CNN Tuesday.”We’re not there yet, but I think we’re close to coming to some determination. Because if, in fact, a person who may or may not be infected wants to prevent infecting someone else, one of the best ways to do that is with a mask. Copyright © 2020, ABC Audio. All rights reserved.