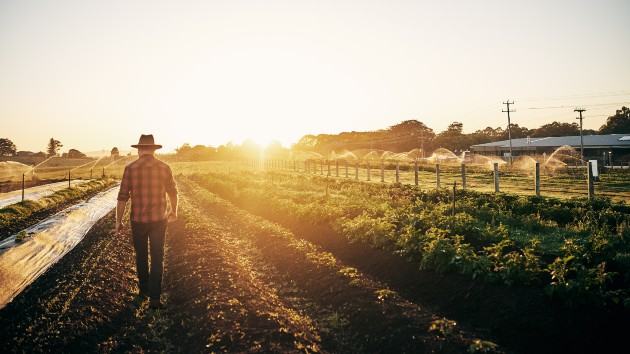 (NEW YORK) — As the coronavirus crisis shut down much of the country’s workforce or forced it to make dramatic accommodations, the nation’s farmers have been hard at work, producing food supplies for the nation.But they are doing so amid a climate of uncertainty and fear, including for the safety of field workers and others, according to industry leaders.Patty Edelburg, the vice president of the National Farmers Union, a national coalition that has over 200,000 members, said farmers have seen drops in sales due to restaurant, store and hospitality closures. Even though people are still buying food from grocery stores, it has not been enough to keep their sales prices high and farmers are worried that they may be in an economic hole for years to come.”The potential is there if the virus spreads to the point where they can’t sell [their goods],” she told ABC News.Edelburg and other farmers have said that they’re still working on their farms and, for the most part, keeping production at the same level before the pandemic hit America. Nick Levendofsky, the director of external affairs for the Rocky Mountain Farmers Union, which has 20,000 members in Colorado, Wyoming and New Mexico, said prices have been fluctuating because of changing consumer demand.”When people are buying tons and tons of one item like eggs or canned food, then we have a distribution problem,” he said, instead of other items like milk or beef.Milk price futures went from $18 per hundredweight (cwt) in January to nearly $13 per cwt in March because of the pandemic, Edelburg, a Wisconsin dairy farmer, said. Beef prices have also gone down 25% over the last few weeks, according to Edelburg.Levendofsky said the long-term effects of these price and demand changes have left farmers in a quagmire, since they have to make decisions for what crops they will plant and how much livestock to buy before the spring planting season begins.”It’s our concern that production might ramp up to meet that demand but it’s not going to be something that producers should rely on, because this will eventually pass,” he said. “Consumers will go back to their normal buying levels.”While there are no indications that the virus can be spread through crops or livestock, there are fears about workers contracting it, Levendofsky said.Monica Ramirez, the founder and president of Justice for Migrant Women, which advocates for migrant workers, told ABC’s Nightline some farmers are providing extra protection for their field workers, including gloves, masks and cards that help them signal to law enforcement officers that they are essential workers. However, she said there were some reports that the field workers do not have any protection from COVID-19″What most concerns us is the workers who aren’t getting any information and where they aren’t getting any extra protection to keep them healthy,” she said.Ramirez said she heard of some stories of farms closing down because workers could not be in packing sheds or facilities because of social distancing precautions. And processing plant shutdowns would immediately cripple supply, particularly for dairy farmers, who would have to dump their milk, Edelburg said.The federal coronavirus bill signed into law last week provided $23.5 billion in assistance for farmers, including $14 billion that will be used by the U.S. Dept. of Agricutlure for its Commodity Credit Corporation, which funds its trade aid programs. Experts say Agriculture Secretary Sonny Perdue will have broad discretion on how to use those funds.Edelburg said she was still reviewing the stimulus bill that Congress passed and the president signed last week, however, she said it is going to take billions of dollars to help out farmers. The government is going to have to step up in other ways if farmers are going to survive the next few months, according to industry leaders.Levendofsky said crop and cattle insurance, which is subsidized by the government, should get a bigger boost of federal dollars.”It’s the only form of protection that farmers have now,” he said.In the meantime, leaders should come up with safety regulations to prevent outbreaks from hitting processing centers and fields, according to Levendofsky.”This won’t be the last time we deal with something like this. We need to be ahead of it,” he said. Copyright © 2020, ABC Audio. All rights reserved.