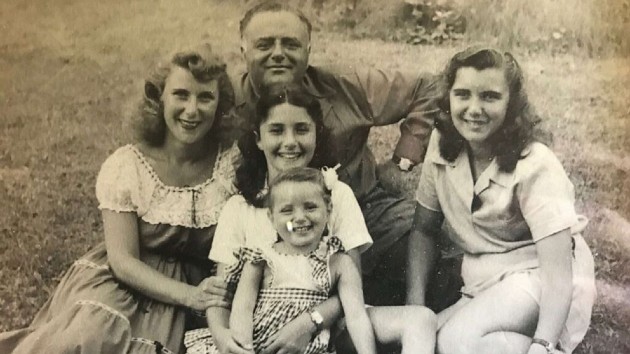 Nancy Ann Hamilton, seen as a young girl with dark hair in the middle of this undated family photo with her kid sister, Janet, on her lap, died on March 21, 2020, in Skagit County, Wash., after contracting the coronavirus. (Courtesy Barbara Friedman)
Posted on March 27, 2020 by ABC News

(NEW YORK) — Had she been asked several months ago, before the coronavirus pandemic began to disproportionately kill people over the age of 60 like her sister, Janet Lane might have shrugged it off. But while in a supermarket this week, the Maryland woman found the question cringeworthy.An engaged couple standing in line behind her had struck up a casual conversation with her about the practice of social distancing and eventually got around to how Lane was doing amid these dark days of COVID-19 horror and hysteria.”Because it was so fresh, I blurted that I was not so well as I had just lost my sister due to complications from the virus, and that she lived in Washington state,” Lane told ABC News.She said the young woman then asked something that took her aback.”But how old was she?” the woman asked.”The ‘but’ says it all,” Lane said. “Looking at me, she surmised my sister must have been old, dispensable, had underlying conditions, was replaceable, unnecessary, irrelevant, expensive, wasting our precious resources.”But to Lane, her big sister, Nancy Ann Hamilton, was none of the above.“She was very smart,” Lane said of her sister, a graduate of Smith College and a New York native. “She was very hard to contain. She had strong opinions. She was a life-long Democrat. She was a singer. At one point, she was a private pilot. She had her own pilot’s license. She produced a production called ‘Montage’ on television years ago. She worked for the post office for 10 years and started a whole campaign to improve their lighting.”“She didn’t ever have a lot of money, but she traveled all over the world,” Lane added. “She found a way to do it on a shoestring by staying with friends and remote relatives. She loved being involved with things.”She was also the stepsister of ABC News producer Barbara Friedman.Up to the point of her death on Saturday at a hospital in Skagit County, Washington, where county health department officials say 63 people have been diagnosed with coronavirus, Hamilton had been an active senior citizen.“Despite the fact that she did indeed have underlying health conditions, she was extremely active in her community,” Lane said. “She was probably with large groups of people. She was very active in politics, she was active in choral there. So that may have exacerbated her opportunities to get infected.”On March 19, Hamilton fell gravely ill and was admitted to the hospital, where tests confirmed she had the virus and she was placed in isolation, Lane said. Her husband was immediately put on quarantine at their home in Mt. Vernon, Washington, preventing him from being near his wife when she died on Saturday, Lane said.With much-needed medical equipment like ventilators in short supply, some prominent politicians have suggested in recent days that senior citizens who contract the virus should be willing to be “sacrificed” for the sake of their children and grandchildren, and to keep the country out of economic turmoil. Lane said she finds such a proposition preposterous and, ironically, short-sighted.”The COVID-19 crisis and the subsequent loss of my sister has confirmed to me what I suspected before, which is that older Americans are not valued by many,” said Lane, who works full-time for an agency that helps prisoners reenter society. “But there are a tremendous number of people, let’s start at the top with (Supreme Court Justice) Ruth Bader Ginsburg, who, despite whatever their conditions, are functioning at the very top level. I think that people are not recognizing the fact that older Americans are still quite able to contribute to our society.”She said that when she and her family safely receive her sister’s ashes, they plan to have a celebration and “tell some Nancy stories.””Last Friday I had a sister, and on Saturday I did not,” Lane said. “She was strong and brave and had no edit mode. She would be the first voice to say, ‘Don’t bury us before we’re dead.” Copyright © 2020, ABC Audio. All rights reserved.