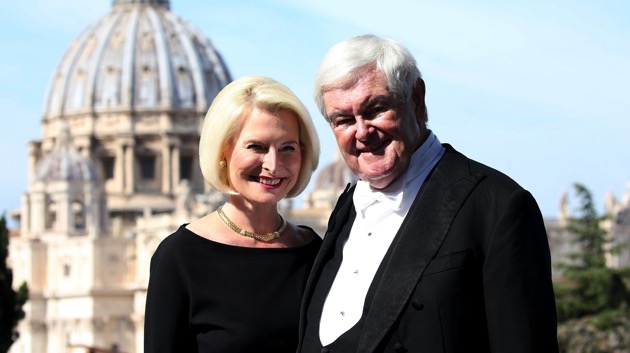 (NEW YORK) — Former Georgia Rep. Newt Gingrich — a known friend of President Donald Trump, who also served as House Speaker during his tenure — joined the hosts of ABC’s The View, saying he’s “moderately optimistic” about the U.S. response to the novel coronavirus, specifically in Congress.Late Wednesday evening, the Senate passed a bipartisan stimulus package worth $2 trillion to offset the economic impacts of the COVID-19 spread.”They did the right thing to pass it,” he said. “The country needs to have a feel that… we as a country can move, that we can get things done.”Gingrich told the hosts he gives Senate Minority Leader Chuck Schumer credit for working together with Majority Leader Mitch McConnell “over the last three or four days,” adding that “we can’t afford some of the pettiness” if the government wants to successfully make it through.”I’m moderately optimistic that we may be entering a period where protecting Americans and defeating the virus is more important than partisan games,” he said.

.@newtgingrich, who is isolated in Italy amid coronavirus concerns, tells us he’s “moderately optimistic that we may be entering a period where protecting Americans and defeating the virus is more important than partisan games.” https://t.co/zJecmBUqUR pic.twitter.com/tGzZRkXntw

Gingrich and his wife, Callista, have found themselves stuck in what has been considered an epicenter of the spread of the novel coronavirus through Europe: Italy. They have been based in Rome since 2017 and Callista currently serves as Trump’s advisor to the Vatican.”Everything’s closed down except grocery stores and pharmacies and gas stations,” Gingrich told the hosts of the Italian response. “The police are here on the street without a legitimate reason. They will fine you up to $8,000.”When asked about his own health, Gingrich said he and Callista have “his and hers thermometers” and check frequently to make sure their temperatures are safe.”We seem to be doing pretty good right now, and we’re isolated,” he said.While Gingrich said the Italian government was “a little late, frankly” in starting to recognize the seriousness of the virus, he said that more recently, he’s “been very impressed — not just with the government, but also with the Italian people.””They know it’s life and death, and I think probably in the next few days, we’re going to see the peak of the virus — which has mostly been in northern Italy,” he said.Gingrich said that although he does not think it’s necessary to “close” states with low numbers of COVID-19 cases, he recommended hotspots like New York should have “an Italian kind of total shutdown.”Reflecting on the White House’s approach to address the virus, Gingrich dismissed the administration’s lack of personal protective equipment (PPE) in stockpile, saying they didn’t yet know how dangerous it would become.”I think until you’ve experienced a pandemic like this, you always discount it,” he told co-host Meghan McCain, who asked him what he thought went wrong on the U.S. front. “Without getting into politics, in the last administration when we had the H1N1 virus, we used an amazing number of masks and they were told ‘you need to go out and buy a bunch of masks.’ They didn’t do it.”Gingrich added, “so the stockpike wasn’t rebuilt.”His remarks echoed those of Trump, who has also passed blame to the previous administration. Gingrich estimated the U.S. stockpile is “about six weeks” behind where it should be.He also told the hosts that the Centers for Disease Control and Prevention are the ones who “blew it” in the early days of the outbreak, because “they didn’t get the tests right early on” — adding that cost the United States about “three weeks of production.”

"We've got to do what we can to make sure that the American people don't get crushed economically while we're trying to crush the virus," @newtgingrich tells us. "I think it's a really important balancing act." https://t.co/cVclFZQmjA https://t.co/anHyU1wIKw

“We’ve got to do what we can to make sure that the American people don’t get crushed economically while we’re trying to crush the virus,” he said. “I think it’s a really important balancing act.”This week, Trump’s tone about the economic crisis has become more alarming, saying during a Fox News virtual town hall on Tuesday that the U.S. is “not built to shut down” and suggested during a White House briefing on the same day that he wants the country to re-open “by Easter.”When asked by co-host Sunny Hostin whether he thinks this timeline is possible, Gingrich deflected the question. He instead turned to Italy’s response, saying even religious hubs like Rome aren’t holding services.”We’re in the city of Rome which has 900 churches, and none of them have mass if you can imagine how big a change that is,” he said.Gingrich, now a political pundit, highlighted the high demand for PPE in Italy, which is also becoming a growing problem in the U.S.”Because the demand for respirators and intensive care has been beyond any previous planning, doctors have been forced into the kind of triage-thinking developed for intense battlefield casualty situations,” he said in an opinion piece published in Newsweek on March 13. “There are reports that emergency room doctors are allotting respirators to those with higher life expectancy due to the limited equipment in the hardest hit areas of the province.”The World Health Organization reported on Wednesday that Italy has surpassed 69,000 confirmed cases of COVID-19 — and 6,820 cases resulting in deaths.While commending Trump for shutting down all U.S. travel to Europe, Gingrich also shared a grave warning, saying the U.S. needs to be “planning for a worst-case pandemic” and “using the kind of intensity of implementation which served us so well in World War II.””The Pence-led Coronavirus Task Force has begun to pull things together, but it should have a planning group that creates a worst-case projection and then devises the steps necessary to smother the pandemic and minimize its impact,” he said.Gingrich suggested that the U.S. should be not only thinking about its own economic crisis, but also how it will be impacted by one in Europe. Copyright © 2020, ABC Audio. All rights reserved.