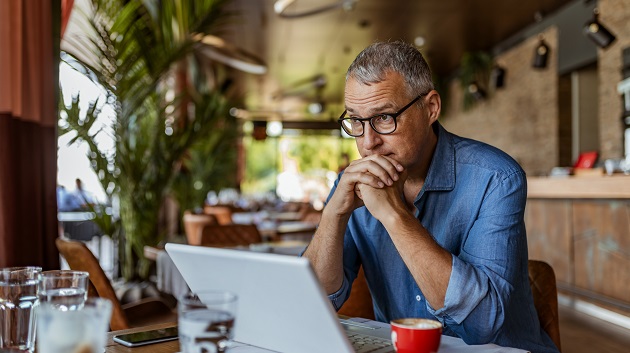 (NEW YORK)– Last Monday, Julianna Calderon worked as a server at a local Long Island restaurant, but that changed shortly after she turned on her TV and watched New York Governor Andrew Cuomo deliver his executive order.”Any bar or restaurant closes at 8 p.m. tonight,” Cuomo announced, along with several other measures in an attempt to slow the spread of the novel coronavirus. Most New York bars and restaurants are now limited to delivery or pickup only.”We have to do it, we have to be serious,”‘ Cuomo said.The next day, a manager informed Calderon that she was terminated. “I’ve been working since I was 15 years old,” Calderon, 24, told ABC News. “I never thought I would go through something like this — especially at such a young age.”That same day, Calderon attempted to apply for unemployment, and she was not alone.Last week, a total of 1.7 million people called New York State’s Department of Labor (NYS DOL). The department has seen a 1000% increase in claims in some areas of New York, according to a spokesperson.New York is one of several states where mandatory shutdowns of various businesses have gone into effect — sparking a drastic increase in unemployment claims that are overwhelming state labor departments.Calderon first attempted to apply for unemployment online, but she says she immediately ran into complications.”You’d get through about two pages of paperwork, and the website would just crash,” said Calderon. “It took me two days alone to create an account.”On that Tuesday afternoon, Calderon was one of 110,000 others visiting NYS DOL’s website, according to a department spokesperson. That is nearly three times the number of visitors the site received the previous Tuesday.NYS DOL was not the only state labor department to report issues stemming from website traffic last week.”Going on the website — it just didn’t load at all,” said Ryan Connolly, a software developer from Tampa Bay, Florida, who was also laid off last Tuesday. Connolly tried applying for unemployment on the Florida Department of Economic Opportunity (FDEO) website.”It would try to load, load, load, and I would get failure messages in my browser, so at that point, reality hit, I was definitely not the only one in this boat,” Connolly told ABC News.A spokesperson for the FREO says the department is seeing a “historic increase” in Floridians applying for unemployment, but declined to disclose the total number of unemployment applications the department received last week.The United States Department of Labor is asking states not to disclose any more unemployment data — claiming the information is an important economic indicator that could potentially impact the financial markets. The DOL plans to release the unemployment figures Thursday at 8:30 a.m.Despite the embargo, ABC News can already report a sharp spike in unemployment claims.Last week, Pennsylvania’s Department of Labor & Industry received approximately 121,000 online claims for unemployment in the span of two days, a spokesperson disclosed prior to the DOL’s request to embargo unemployment figures.Tuesday, Morgan Stanley chief U.S. economist Ellen Zentner predicted that Thursday’s number would unveil a staggering 3.4 million jobless claims.”That number that comes out on Thursday … it’s not even going to represent fully the amount of people that are trying to make a claim,” said Calderon, who still hasn’t been able to apply for unemployment.When she finally managed to create an account on NYS DOL’s website last Friday, she said she was prompted to call the department to complete her claim.”Sometimes I would call and it would just be like a dial tone — or it would just hang up on you midway through the automated message,” she said. “It makes you just want to stop trying, but you can’t … because you need money.”Carlton Oakes, an inventory supervisor living in Arkansas, was laid off midway through his job training last week. Much like Calderon, his first thought was to apply for unemployment online via the Arkansas Division of Workforce Services (ADWS) website.”The website won’t accept my social security [number], it pops up as invalid — and I’ve had friends who say they’ve had the same problem,” Oakes told ABC News. He turned to the department’s phone lines, which he says were constantly busy.”I got the busy signal and then I finally got through — and then after 15 minutes it disconnected me,” said Oakes. He says his last resort was to go to the department’s office in person.”You can’t even get into the office, you have to walk into a plastic walled room,” said Oakes’ wife Michelle, who accompanied her husband. “You can’t stand 6 feet apart [from other people], it’s maybe 10’ by 10’, if that — and there’s that drop box that you have to put your information in.”:The couple were reluctant to leave the application in the office’s drop box, which they say was left unattended, but said they had no choice. “I mean literally, you’re putting all your information down and anybody could get into this box,” said Michelle.An ADWS spokesperson did not answer specific questions about the department’s website and phone lines, but says the office has received “an influx in calls regarding unemployment applications.”NYS DOL says it has added server capacity to its website and has created an alphabetical system for New Yorkers to apply based on the first letter of the applicants last name.Calderon’s designated day to apply was Monday, but she says she still couldn’t get through to speak with someone.”It doesn’t help at all,” said Calderon. “It seems every week that goes by more and more people are applying and I can’t get through — that’s another week where there’s no money coming in.”Calderon says she’s in the middle of paying her student loans, and she just adopted a three-month-old puppy. She plans to wake up early Thursday morning, the next day she’ll be able to apply, and attempt to be one of the first to call NYS DOL.”I can’t imagine being unemployed for longer than a month,” said Calderon. “I just can’t do it.”Copyright © 2020, ABC Audio. All rights reserved.

Traveling over the holidays? Experts say take advantage of vouchers and lack of change fees
Police investigate ‘suspicious’ death of mother and child at Padres stadium in San Diego
Three dead, over 50 injured in Amtrak train derailment
‘Shang-Chi and the Legend of the Ten Rings’ dominates box office for fourth straight week
PA hits vaccine milestone, 85 percent of adults have first shot
What is Title 42? Amid backlash, Biden administration defends use of Trump-era order to expel migrants