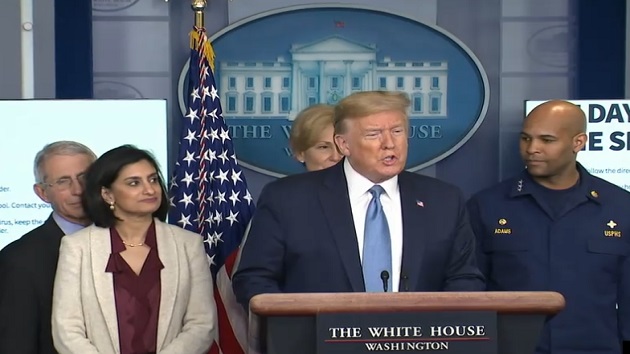 (NEW YORK) — Days after President Trump unveiled a list of new guidelines to combat the spread of coronavirus, the instructions did not seem to be readily available in Spanish on the Centers for Disease Control and Prevention’s Spanish-language site.On the English version of the CDC’s site a document titled “The President’s Coronavirus Guidelines for America” is at the top of the screen, linked with a large yellow banner across the page.Trump introduced the guidelines on Monday which include avoiding groups of more than 10 people, avoiding discretionary travel, socializing at bars and restaurants, and more – and said they were important for everyone to take for the following 15 days.”If everyone makes this change – or these critical changes and sacrifices now, we will rally together as one nation and we will defeat the virus,” he said from the podium.A spokesperson for the vice president, who leads the administration’s coronavirus task force, told ABC News that a Spanish translation of the guidelines had been shared with “Hispanic media” on Tuesday.On Wednesday, the spokesperson also shared Spanish-language graphics of those guidelines with ABC News. The spokesperson did not say if they were being translated into any other languages. The translated guidelines did not appear to be available on the CDC’s Spanish-language website as of Thursday morning.

Time and information being of the essence, some Latino groups have taken matters into their own hands.Darryl Morin, president of Forward Latino, sent a letter to CDC Director Robert Redfield and Secretary of Health and Human Services Alex Azar, urging them to make the guidelines and the website as a whole more accessible to Spanish speaking communities.The Congressional Hispanic Caucus’ BOLD PAC translated the guidelines themselves, sending them out in an email blast.”There are more than 40 million Americans who speak Spanish at home. It’s unacceptable for the President to provide public health guidelines without offering those guidelines in Spanish and other languages spoken in the United States,” Tony Cárdenas, chairman of CHC BOLD PAC, said in a statement. “As families across the country are equipping themselves with lifesaving information, it’s cruel for this administration to not make this information accessible to everyone — in a language they understand and trust. Our nation is facing an unprecedented public health crisis, a pandemic, and it will take all of us working together to keep our communities and our loved ones healthy.”Latino Rebels also says they contacted the White House on Monday night. They say the administration “acknowledged receipt of the request, but did not share specific information” on when the Spanish version would be out.Dr. Regan Bergmark, an ear, nose and throat surgeon at Brigham Women’s hospital in Boston, and a scientist at their Center for Surgery and Public Health, tells ABC that in a crisis like this, time is of the essence to make sure the public is informed – and reaching every community.”I think this disparity story is going to be central to what ultimately happens in this epidemic. We are a multilingual country and so any public health intervention has to be accessible to everyone,” Bergmark said, noting that she has seen language barriers be an issue in hospitals as it is.”Every second matters. Vulnerable populations are having – there’s already confusion about what people should be doing. If you add another layer that not everyone is able to understand those guidelines for what Americans should be doing, it poses a huge challenge and you’re just – you’re not making it easy for people to rapidly adapt,” Bergmark said.Jazmin Vargas, press secretary for CHC BOLD, tweeted at the Trump administration’s deputy press secretary Ken Farnaso on Monday – asking him if the guidelines were available in Spanish.She received a reply Wednesday afternoon, Farnaso tweeting back what she said were screenshots, then a link when she asked again, to a Spanish translation that still does not appear to be linked on the main CDC Spanish page. Vargas said she continued to search the site for the new guidelines’ translation and still, could not find them.A review by ABC News of the Spanish CDC site yielded the same results.On the CDC Spanish language site, the most updated pdf’s on “what you need to know” is currently from March 6. There is a March 16 pdf outlining basic symptoms.”Every American, regardless of language, has the right to receive the same protections as any other American,” Morin told ABC. “When you do not provide the same service, or access to the same information – especially when lives are on the line – it represents a critical failure to uphold one’s sworn oath of office.””The sooner we’re on the same page the sooner this situation will come to an end and we can recover and minimize the hardship and the loss.”Wednesday afternoon, Morin said that the CDC had responded to them – saying that they were “currently undertaking efforts to make updated information available” on the coronavirus Spanish language page, “by the end of this week.””We’re all in this together so we have to reach every single American with the correct information,” Bergmark told ABC. And we all have to do the right thing.”Bergmark noted that the very populations who will suffer from the communication barrier here, when guidance in their language isn’t easily accessible – will also likely be the populations who suffer financially from this pandemic as well.”People who have limited English proficiency are more likely to have lower paying jobs – more economic instability – and so you’re taking people who are already having a hard time, and not getting them the right information.”Clear information communicated effectively is key to ensuring the virus’ spread slows, advocates said.”For someone like me, my parents don’t speak English. I’ve been trying to make them understand how to take care of themselves right now – but I think they look to leadership for guidance,” Vargas told ABC. “It’s a reality that other languages besides English are spoken in this country – and this is detrimental to all our communities.””The president has the biggest microphone in the country. He could just tweet this out,” Vargas continued. “He would get so many kudos.”