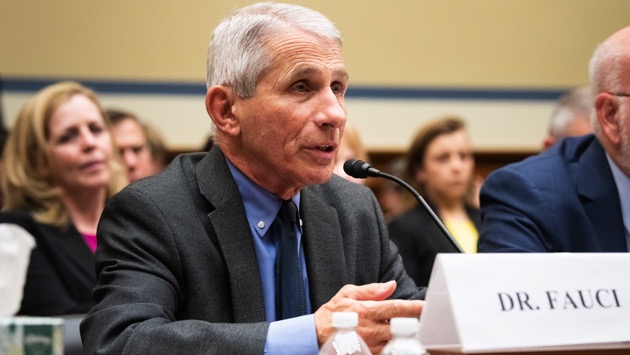 (WASHINGTON) — Some of the nation’s top public health experts said they found the reasoning behind President Donald Trump’s new travel restrictions “pretty compelling” when answering questions from lawmakers on Capitol Hill Thursday regarding the administration’s response to the novel coronavirus.Speaking from the Oval Office Wednesday night, Trump said all travelers from much of Europe — except Americans and permanent U.S. residents — would be banned from entering the U.S. for the next 30 days, but it wouldn’t apply to the United Kingdom. He also announced a series of stimulus measures, amid huge losses on Wall Street and as the numbers of Americans infected with the novel coronavirus grows exponentially.The developments come as Trump’s administration tries to cut a deal with congressional Democrats on economic relief measures that could include everything from paid sick leave to a payroll tax cut.Here is how developments are unfolding:Fauci and Redfield back Trump’s European travel banDr. Anthony Fauci, the widely-respected director the National Institute of Allergy and Infectious Diseases, and Centers for Disease Control and Prevention Director Dr. Robert Redfield, appeared before the House Oversight Committee for a second day of questioning Thursday and backed President Trump’s travel ban from much of Europe.”The real risk in general right now and this is why the president took the action he did last night within the world now over 70 percent of the new cases are linked to Europe” Redfield said. “Europe is the new China, and that’s why the president made those statements.”When Vermont Democratic Rep. Peter Welch asked if there was a medical reason for excluding the U.K. from the ban, Redfield said, “We were looking at the extent of new cases in different areas,” adding “because there’s no borders.”Welch, not satisfied with the response, turned to Fauci, who backed up his colleague and the president. Fauci named Italy, France and Germany as the European countries with the most cases.”When the discussion was, why don’t we just start off and say, ‘ban from Italy,’ we were told by the State Department you really can’t do that because it’s like one country,” Fauci said. “The reason I believe that the U.K. was left out was because there was a difference between the ease of transportation between the European countries and the U.K.”Welch interrupted, “Well, that’s Brexit.”Fauci says Trump administration could ‘seriously consider’ more travel bansCalifornia Democratic Rep. Jimmy Gomez raises Trump’s various travel restrictions, asking if the European travel ban will have a significant impact on reducing the spread of community cases, Fauci said, “a firm yes.””Because if you look at the numbers it’s very clear that 70 percent of new infections in world are coming from that region, from Europe,” Fauci said. “Of the 35 or more states that have infections, 30 of them now, most recently, have gotten them from a travel related case from that region.””It was pretty compelling that we needed to turn off the source from that region,” Fauci said.Asked what changed between Wednesday’s hearing and Trump’s evening announcement, Fauci said, “the dynamics of the outbreak changed.””We did that with China, and then as days and weeks go by, we saw it wasn’t China anymore. It was another region… it shifted from China to the rest of the world to Europe to the rest of the world.”When asked if he think the Trump administration will enact more travel bans, Fauci said he thinks it would be seriously considered.”If, in fact, the dynamics of the outbreak mandates that, I think they would seriously consider that,” Fauci said. “I can tell you it would be seriously considered.”Redfield added, “We are really continuing to watch the whole world at this point in time… with Europe driving the global outbreak, for sure, for the last couple days.”Fauci tells Congress: Testing system ‘is a failing’Florida Rep. Debbie Waserman Schultz pressed Redfield on testing, asking who specifically is in charge of determining whether someone can receive a test, and citing some health care workers have sent complaints to the CDC that they are unable to receive testing.”Who is in charge of making sure that people who need to get tested can get tested?” Waserman said in a fiery line of questioning, “Who?””I will look into that in detail and get back to your office as soon as I can,” Redfield said, deferring judgement to local health labs before having Fauci intervene with a startling answer.”The system is not really geared to what we need right now — what you are asking for. This is a failing. It is a failing. Let’s admit it,” Fauci said. “The idea of anybody getting it easily the way people in other countries are doing it, we’re not set up for that. Do I think we should be? Yes. But we’re not.”

Pressed about limited availability of coronavirus tests, CDC Dir. Robert Redfield turns to NIH official Dr. Anthony Fauci, who says, “The system is not really geared to what we need right now, what you are asking for. That is a failing…Let’s admit it." https://t.co/rICj2Ju75V pic.twitter.com/mRAzippOwA

He added in questioning later that “from the beginning, it was not set up to do that.””The system was geared for individual doctor and patient. What we’re going through now transcends that.”Fauci also said people should look to the U.S. Capitol cancelling public tours as a model example of what to do — avoid large gatherings.”We’ve got to act like there’s going to be a problem,” he added.On Wednesday, Fauci told the same committee, “Bottom line, it’s going to get worse,” adding that the U.S. will certainly see more cases and how much worse it gets depends on the ability to contain those infected.Demand for respirators could grow to 1 billion in 6 monthsRobert Kadlec, a senior Health and Human Services official, again referenced the limited supply of respirators in U.S. stockpile, this time giving new numbers on how many respirators, or specialized face masks, are needed.Kadlec said annually about 350M respirators are used, with 35M used by the health care industry.”We believe the demand could be several hundred million to up to a billion in a six-month period. It’s a very high demand item,” Kadlec told the House Oversight Committee Thursday.This estimate is significantly higher than what HHS has said before. On March 4, HHS put the goal at buying 500 million N95 respirators.He reiterated that there is a concern of shortages in part because of many of the materials are from overseas.One thing the government is doing is making clear that masks used for other industries — in coal mines, for example — will be allowed for use by health care workers.Copyright © 2020, ABC Audio. All rights reserved.