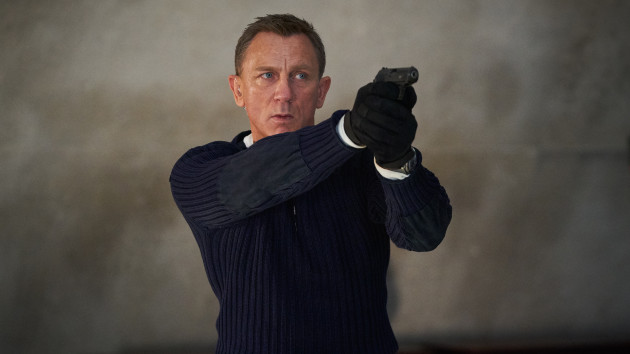 (LOS ANGELES) — (NOTE LANGUAGE) With his on-set ankle injury and an unplanned explosion on set, there were rumors that Daniel Craig’s last go-round as James Bond was doomed. And that was before the studio decided to delay No Time to Die’s release over COVID-19 coronavirus fears.

However, the actor tells GQ that naysayers’ claims at the time, “pi**es me off.” He adds, “Because I’m just like, ‘Don’t curse our movie.’ And also, we’re doing our best here."”

In a probing interview with the magazine, Craig brings up his financially strapped upbringing, his early love of acting, and hesitation to accept the Bond role, replacing Pierce Brosnan.  His insecurities about the role — amid critical “James Blonde” headlines from naysayers — continued right up to the premiere of his debut as the super spy in 2006’s Casino Royale, which Queen Elizabeth herself attended.

Those insecurities waned only when the audience began clapping after the traditional Bond opening “teaser.”

Fast-forward 14 years and four films later.  Craig’s Bond movies have been critical and commercial successes, and he’s ready to hang the tux up for good. But first he had to get past the final day of shooting.

“I had a whole thing kind of put together in my head that I wanted to say [to the crew]. I couldn’t get it out,” Craig says.

Tears and Campari flowed into the next day, and franchise producer Barbara Broccoli described herself as an “utter mess.”  But Craig is now at peace with his decision to walk away.