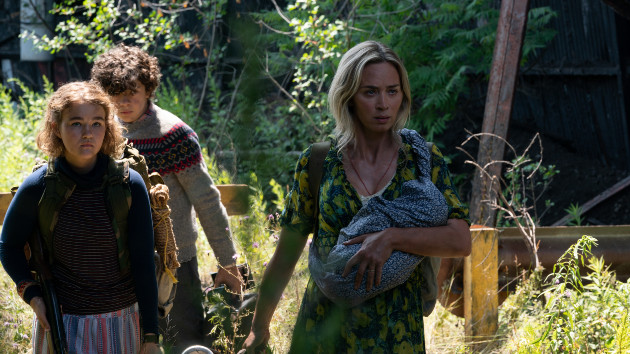 (LOS ANGELES) — Paramount Pictures announced its taking a move from the retro horror movie game with a double-feature of its hit A Quiet Place, and its forthcoming sequel, A Quiet Place Part II.

Both John Krasinski-directed films will be shown on Wednesday March 18, two days before the sequel officially premieres in theaters.

Advance tickets can be purchased at AQuietPlaceMovie.com, and also at participating box offices.  It’s only playing in Dolby Cinema and other premium format theaters.

Like its predecessor, A Quiet Place Part II centers on mankind trying to survive in the wake of an invasion by killer creatures that hunt by using their incredibly overdeveloped sense of hearing.

Once again starring Krasinski’s wife, Emily Blunt, as the matriarch of the Abbott family, she must try to navigate the horrific new world while keeping her kids — played by Millicent Simmonds and Noah Jupe — safe.

However, this time around, she finds out there’s plenty more to fear in the outside world than the monsters. The film also stars Cillian Murphy, Djimon Hounsou and John Krasinski.

Pastor says addressing resistance to Biden administration is part of the job
John Krasinski, Dan Levy, Regina King are the first ‘SNL’ hosts of 2021
Lawmakers outraged at images of National Guard sent from Capitol to parking garages
‘Game of Thrones’ prequel, ‘Tales of Dunk and Egg’, in the works at HBO
Coronavirus live updates: Fauci says lack of truthfulness ‘very likely’ cost lives
Olivia Jade returns to YouTube after over a year, “I can’t change the past”