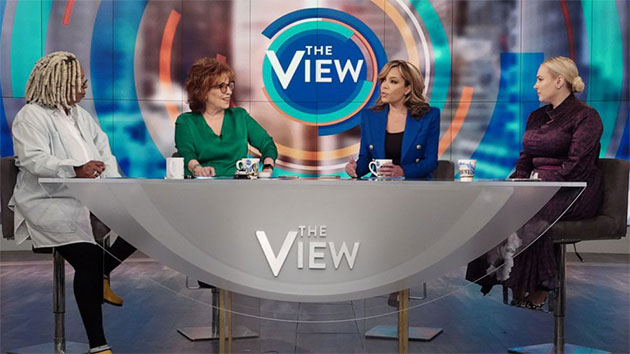 (NEW YORK) — “The View” co-hosts questioned President Donald Trump’s decision to appoint Vice President Michael Pence to lead the U.S. government response to the coronavirus outbreak.Trump spoke during a news conference on Wednesday after days of mixed messages about the potential risk of coronavirus — real name COVID-19 — spreading throughout the U.S. Trump said Pence would be working with “the professionals, the doctors” and that the “team is brilliant.”When Pence spoke, he said that “the threat to the American public remains low,” telling reporters that he’d coordinate the overall response and that additional personnel would be added at the White House.”The View” co-hosts weighed in on Pence’s new role on Thursday.”Mike Pence has a really bad record when it comes to health records,” McCain said referring to Pence’s handling of an HIV outbreak in Indiana while he was governor. “It really impacted HIV outbreaks in Indiana.””Someone with a medical and virus background should be in charge of a potentially deadly and lethal virus and medical outbreak in the United States of America,” McCain continued. “I’m not comfortable with him in charge.” Goldberg said she had a theory of her own as to why Trump assigned Pence to lead the response.”I think [Trump] chose [Pence] because he knows this is more extreme than anybody wants to talk about,” Goldberg said. “We don’t need to panic, but whenever [Trump] wants to look like he’s doing something really good, he will do something and then put somebody else in charge of it when he knows there’s a cliff coming. I think he’s setting him up.”Hostin agreed with Goldberg’s claim.”One of the reasons I think [Trump] chose the vice president to do this is because it is so serious,” Hostin said. “Had he appointed someone with real medical background, that person would not necessarily cover his ineptitude.””We know that Mike Pence will cover for him because he is such a loyalist,” Hostin added. “I think Trump needed someone in that position just in case things go bad.” Centers for Disease Control and Prevention officials announced Wednesday night that a person had been diagnosed with COVID-19 despite having no travel history or contact with someone who was infected.”To have a healthy sense of fear right now, I’m not judging people, because I certainly do,” McCain said about concerns over COVID-19.”I don’t know if you should have a healthy sense of fear,” Goldberg responded. “I think you should have a healthy sense of paying attention to what’s happening. Fear will stop you.””You have to pay attention,” Goldberg continued. “Be concerned. Be aware. But don’t let it stupefy you so much that you can’t move, because that’s not going to help either.”Every episode of ABC’s award-winning talk show “The View” is now available as a podcast! Listen and subscribe for free on Apple Podcasts, Google Podcasts, TuneIn, Spotify, Stitcher or the ABC News app. Copyright © 2020, ABC Audio. All rights reserved.