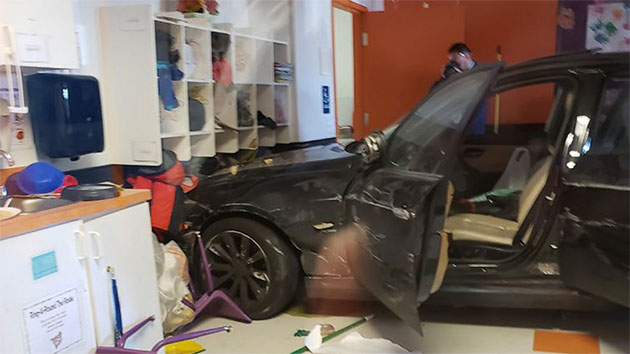 (PHILADELPHIA) — Four children were taken to hospitals after a car barreled into a day care in Pennsylvania on Thursday afternoon, officials said.Seventeen children were in the room, and some of them were napping, as the driver collided into the classroom at Children of America day care in Upper Southampton Township, according to Gregg Shore, first assistant district attorney for Bucks County.The driver crashed about 40 or 50 feet into the building, Shore said at a news conference. One of the four children suffered serious injuries and was taken to the Children’s Hospital of Philadelphia, Shore said. The township is about 25 miles outside of Philadelphia.Shore did not elaborate on the conditions of the other children.The driver, a woman in her 50s, was taken to a hospital to be treated for minor injuries and has been released, Shore said.Shore described the motorist as a delivery driver who was at the day care in a business capacity. She has been cooperative, he added.The cause of the crash is being investigated.About 75 children were at the day care at the time, and all have been accounted for and have been picked up, Shore said.The kids who were in the room of the crash are around 3 and 4 years old, Shore said. Copyright © 2020, ABC Audio. All rights reserved.