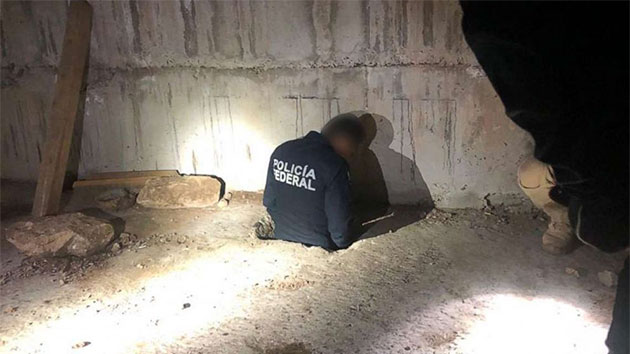 (TUCSON, Ariz.) — Border Patrol agents in southern Arizona have uncovered another illegal tunnel running under the U.S.-Mexico border, the latest in a series of discoveries and the result of renewed efforts targeting underground smuggling routes.The tunnel, according to Customs and Border Protection, ran about 30 feet into Nogales, Arizona. No arrests were immediately made in connection with the tunnel, a CBP official confirmed to ABC News.It’s the third time since December that agents have thwarted a suspected underground smuggling route in the area, according to Border Patrol.Similar tunnels used for drug trafficking have recently been found across the southern U.S. border as part of regularly coordinating investigations with Mexican authorities.Tensions between the U.S. and Mexico have been heightened over the past year as Trump administration officials push for further cooperation to secure the southern border, including petitioning for more resources into the border wall.Mexican government officials in early 2019 were reluctant to accept the administration’s Migrant Protection Protocols, also known as the “Remain in Mexico” policy. The protocols have exposed tens of thousands of Central American asylum seekers to the dangers of Mexican-border towns while they await their immigration court hearings.Despite the pushback, the Department of Homeland Security expanded the program across the southern border, while front-line Border Patrol agents face on-going security challenges. Those efforts require careful communication and long-standing ties with Mexico’s military, according to multiple Border Patrol officials.Last month, federal authorities in San Diego discovered the longest cross-border tunnel on record. It extended more than 14 football fields and included lighting fixtures, cabling and an elevator, according to CBP.Customs officials have seen a spike in hard narcotics trafficking primarily of Fentanyl, a powerful synthetic opioid linked to a rise in overdose deaths in recent years.At the same time, Border Patrol seized far less marijuana in recent years, according to the latest CBP data. The reduction is a likely result of U.S. states legalizing medicinal and recreational cannabis use, an agency official said.The tunnel discovered in Nogales this week was less sophisticated, allowing only enough space for one person to crawl through at a time, according to the official.Arizona Border Patrol agents said the newly discovered was built in connection with an extensive sewage system that runs under Nogales’ sister city on the Mexican side of the border, making it more challenging to detect the illicit passage way.After an investigation, authorities filled the passage with concrete. Copyright © 2020, ABC Audio. All rights reserved.