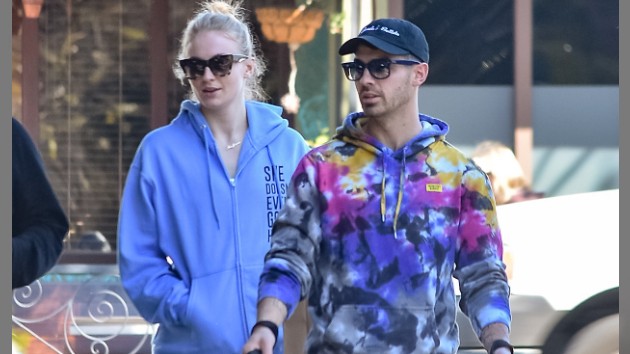 (LOS ANGELES) — Sophie Turner and husband, Joe Jonas were spotted out on a stroll with their pups in Studio City, California on Tuesday.

In the photos, the 24-year-old X-Men series actress kept her outfit super comfy with some black leggings, a baby blue zip up hoodie, and her hair pulled back in a ponytail. Meanwhile, the 30-year-old singer rocked black tights and shorts with a multi-colored hooded pull-over sweater.

Their outing comes about two weeks after it was reported that Turner and Jonas were expecting their first child together, which means fans and paparazzi were on baby bump alert.

Unfortunately, due to the Game of Thrones star’s oversized clothing, there was no telling if she was beginning to show.

Although the couple hasn’t publicly confirmed news that are expecting a baby, they already hold the titles of  “mom” and “dad” to their two four-legged fur babies.