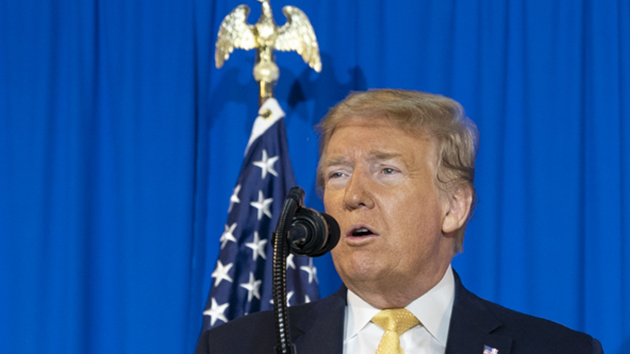 (WASHINGTON) — The Trump campaign is ramping up its efforts to court black voters, with plans to open up retail style community centers in several predominantly black cities in battleground states — to pitch voters on the president’s record with the black community.The community centers are a significant investment in the “Black Voices for Trump” initiative, an effort spearheaded by Katrina Pierson, a senior Trump campaign adviser, to attract black voters who have stood as the bedrock of the Democratic party, according to the campaign.Staffers at the campaign centers will work to register voters, promote the president’s record and sell merchandise including hats, shirts and hoodies stamped with the word “woke,” according to the campaign.Trump campaign manager Brad Parscale told reporters in a briefing Wednesday regarding black support for the president that “at minimum, we’re double from where we were in 2016.”In 2016, Trump carried just 8% of the black vote, but that’s not stopping the president’s team from making big investments toward boosting that number come November.In 2004, former President George W. Bush carried slightly more black support than Trump with 11 percent. But in 2008, the Republican nominee — the late Arizona Sen. John McCain — received just 4% in a historic match up against former President Barack Obama, ending with the first black president getting elected.”You’re never going to get the votes you don’t ask for,” White House senior adviser Jared Kushner told reporters Wednesday, calling the new initiative “more than a toe in the water. It’s a whole foot in the water.”Kushner also mentioned the president’s 2016 pitch to black voters, saying, “Last time it was, ‘What the hell do you have to lose?’ Now you show them what they’ve gained from President Trump and what more they can gain if they get four more years of President Trump.”According to a senior campaign official, the centers, which are set to begin to roll out in the next couple weeks, will be “more like opening a store.”The campaign views the centers as an opportunity to pitch black voters on the president’s record in person, which they say they’ve found to be effective.“We see the numbers coming up in the polls and the demand on the ground when we do these types of events,” Pierson said. “So it’s really important that we take this next step and really bring those voters into the party.”According to mock up designs by the Trump campaign, the centers will have a modern layout featuring wall-to-wall pro-Trump messaging over the outside and inside of each center, promoting parts of the president’s record the campaign hopes will resonate with black voters including the First Step Act, school choice and funding for Historically Black Colleges and Universities.Inside, the campaign will also display pamphlets on touting Trump’s record, according to the campaign.One of the pamphlets will specifically mention the president commuting a life sentence for Alice Johnson, accused for trafficking cocaine in Memphis, saying that “people like Alice are getting a second chance” because of the president under a section titled “criminal justice reform.”Johnson’s release from prison was the result of a presidential pardon following a number of high-profile celebrities raising awareness of her situation, and not connected to the president signing the bipartisan First Step Act, which became law following Johnson’s exit.The community centers give the campaign another chance to double down on its efforts to reach black voters — a demographic where the president has had a historically low approval rating.They will be launched in fifteen cities including Detroit; Atlanta; Philadelphia; Milwaukee; Cleveland; Jacksonville, Florida; Raleigh, North Carolina and Charlotte, South Carolina, over the next couple of weeks.But winning over black voters will be an uphill battle for the president’s re-election campaign.”We don’t know what the ceiling is yet for what Trump’s black support can be in this election,” a senior official said. “Which is why, again, we are going to make these investments in the community like we do in all other communities that are more traditionally Republican.”In 2016, Trump made a bold promise to attract the majority of black voters by the end of his term.”At the end of four years, I guarantee you I will get over 95% of the African-American vote. I promise you,” Trump said to a largely white audience during a rally in Dimondale, Michigan in August 2016.While the president is holding onto support from 94% of those who say they voted for him in 2016, according to a January ABC News/Washington Post poll. Still, his support among minorities is thin, especially when compared to his Democratic rivals.In a head-to-head matchup with Trump, former Vice President Joe Biden has almost unanimous support from black Americans, 94-4%, and a nearly 2-to-1 lead among Hispanics, 61-31%, according to a recent ABC News/Washington Post poll.The Trump campaign said it plans to roll out similar community centers for other coalition efforts, including “Latinos for Trump,” later this year.