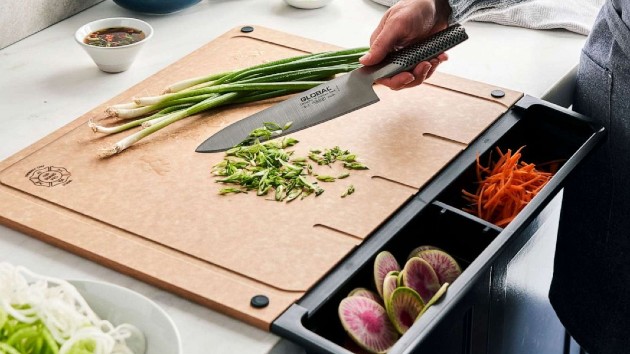 (NEW YORK) — Three siblings who honored their late father’s legacy on Shark Tank have fulfilled his entrepreneurial ambitions and learned their parents’ lessons: chase your dreams. Kaley, Christian and Keira Young turned their dad Keith Young’s cutting board product into an investment opportunity for all five sharks; each invested in the Cup Board Pro in 2018. Now their kitchen gadget has been licensed by one of the largest kitchenwares stores in the U.S., which projects even greater sales. Young, who was a firefighter in New York City and served during the cleanup efforts at Ground Zero, died of cancer — synovial sarcoma — in March 2018, six years after his wife passed away from breast cancer. The siblings told their family’s story and presented Young’s unique cutting board design — that he spent years perfecting — in an episode that was taped with the sharks two years ago. It was the three-month anniversary of their father’s death, which moved the investors to tears.”I really believe that that was, like, a sign from my parents to go on the show,” Kaley Young, 26, told ABC News of the email they received to audition. “We were in front of the sharks exactly three months after our dad passed away, which was, looking back it, I don’t know how we did that. It was really hard, but amazing too.” Christian Young recalled a video of their dad presenting the Cup Board Pro that played during their pitch to the sharks, and said his voice was “booming” in the room. “It felt like he was — talking from heaven — it was hard not to burst out crying,” Christian Young, 22, said. “When all five sharks wanted to go in on the deal, it felt like we almost won the show.””The sharks gave us $100,000. And they have 20% stake in our company. But instead of taking the profits of 20%, they’re giving it back to — a firefighter charity that my dad supported to support other firemen that are fighting 9/11– cancers and sicknesses,” Kaley Young explained. “We’re really grateful that we can give back to families just like us.”Now, the Young siblings have a licensing deal with Williams-Sonoma, who helped them manufacture different versions of their dad’s kitchen gadget backed by the sharks. “Williams-Sonoma helped us manufacture the Cup Board Pro now in the United States,” Kaley Young said of their father’s product that sells online and in stores across the U.S. “And we’re now sold out till April 2020 of the original board. And they just came out with an extra large version, which they have in stock, which is pretty awesome.” Their pitch on Shark Tank and the product itself resonated with viewers almost instantly, Kaley Young recalled. The Cup Board Pro is a wood cutting board with a removable container into which scraps can be put while preparing food. “All of our inventory was sold out as our episode was still airing on the East Coast — by the time our episode aired in California, we were already sold out,” she said. “We had over 130,000 people try to order the Cup Board Pro.” Part of the money the Cup Board Pro makes goes to firefighters battling 9/11 sicknesses.Beyond the business side of things, the siblings said that after the show people from all over the world reached out with stories of their own experiences of loss and grief — “it was amazing to see.” Not only does the cutting board simplify work in the kitchen to give people more family time, Kaley Young explained, “there’s a giveback component to it, where it’s helping families — of 9/11 — that are sick.””It’s a special cutting board that’s near and dear to our heart. And we’re so grateful to share a little bit of Keith Young in everyone’s kitchens,” she said. The siblings said their dad, a super fan of Shark Tank who loved to cook and spend time in the kitchen, “always made the biggest mess,” so the Cup Board Pro “was his solution to simplifying the way someone works in the kitchen.” His pitch, however, went on the back burner, Kaley Young said, when their mom got sick and was diagnosed with breast cancer in 2011. Then, after she died in 2012, Young was asked to be on Food Network’s Chopped, which he won twice. Kaley Young said it “gave him the confidence to pursue the Cup Board Pro. And in 2015, he had 2,000 units shipped here from China.” “On Shark Tank, we went on with our dad’s colors of the natural wood color with a green, lime green and charcoal. And so that one’s known as the original. Then we have a natural with a charcoal color cup or a slate cup. And our slate color, which is an all black Cup Board Pro. And now we have an extra large version. And they’re coming up with two new versions this Spring,” Kaley Young said.Keira Young, 16, said that according to the kitchenware brand, the Cup Board Pro is “the fastest selling and most popular cutting board in the history of Williams-Sonoma.” “Our dad’s dream was to have the Cup Board Pro in every kitchen in America. And it’s so exciting to see that it’s actually coming true,” Keira Young said. Kaley Young said her parents “both really instilled in us how important it is to follow your dreams. And we saw that… with each of our parents.”Now, as they fulfill orders and Young’s dream with the support of Williams-Sonoma, the elder daughter said they can “do what we feel like we came here to do.” “I’m an interior designer. Keira’s in school on the cheerleading team, traveling for cheer. And Christian’s able to finish college, which is pretty awesome that we can still continue our dad’s dream while continuing ours,” she explained. The three siblings said they cherish their closeness working on the product together since their time on Shark Tank.Kaley Young said they have been “a big part of my healing process from losing both my parents — I’m very grateful for both of them.”