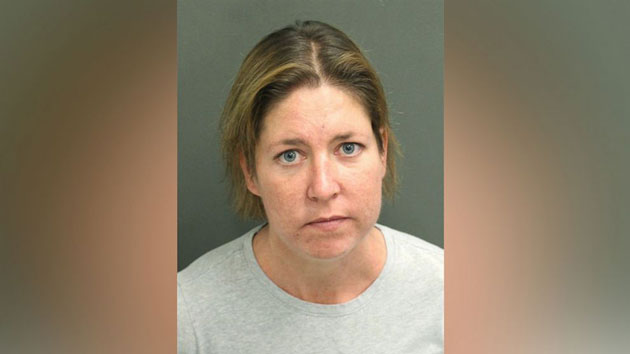 (WINTER PARK, Fla.) — A woman in Florida has been arrested in the death of her boyfriend after she allegedly zipped him into a suitcase and left him there for hours, authorities said.Sarah Boone, 42, called authorities Monday afternoon to report that her boyfriend, 42-year-old Jorge Torres Jr., was dead at her Winter Park home, according to the arrest affidavit. Boone said they were playing hide-and-seek when the couple “jokingly thought it would be funny if Jorge got in the suitcase,” and Boone zipped him inside.Boone said they had been drinking alcohol that night, the affidavit said. She said she then “went upstairs and passed out in her bed.”Boone said she woke up around 11 a.m. when her phone rang multiple times, the affidavit said.When Boone went downstairs and didn’t see her boyfriend anywhere, she “realized that he was possibly still inside the suitcase,” the affidavit said. Boone unzipped the suitcase and found Torres unresponsive and not breathing.When deputies responded to her 911 call, Torres was found lying by the front door near a blue suitcase, the affidavit said. He had a small laceration on his lip and apparent bruising around his eye. Torres was declared dead around 1 p.m.As authorities investigated, they recovered video from Boone’s phone in which Torres was repeatedly yelling out Boone’s name, the affidavit said.Torres was seen on the video pushing on the suitcase, trying to escape, according to the affidavit.In the video, according to the affidavit, Boone said to Torres, “For everything you’ve done to me,” then laughed and said, “F— you. Stupid.”Torres repeatedly called out his girlfriend’s name, and told her, ‘I can’t f—— breathe, seriously,” the video showed, according to the affidavit. When Torres repeatedly told Boone he couldn’t breathe, Boone replied, “That’s what I feel like when you cheat on me … You should probably shut the f— up.”

Arrested: Sarah Boone, 42, for Second Degree Murder in the death of 42-year-old Jorge Torres Jr., who died after Boone zipped him into a suitcase, and didn’t return for hours. pic.twitter.com/JCHWG7WNkp

Bonne was booked on Wednesday for second-degree murder. She does not yet have an attorney or a court date.