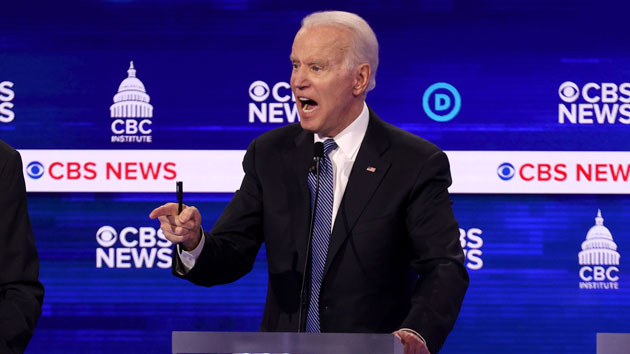 (WASHINGTON) — Anita Dunn, a senior adviser and strategist for former Vice President Joe Biden’s campaign, told ABC News’ “Powerhouse Politics” podcast on Wednesday that she believes Biden will get a “real bump” out of his performance in the upcoming South Carolina primary.“We feel very good about coming out of South Carolina with the kind of momentum that can really help us two days later,” Dunn told ABC News Political Director Rick Klein, stressing her confidence in Biden’s chances of walking away with the highest number of delegates from the Palmetto state and soon after, the 14 Super Tuesday states.Dunn said the former vice president is feeling hopeful after his second-place finish in the Nevada caucuses last weekend, calling it a “comeback.”She added that the campaign was prepared for the first two contests to be “very difficult,” attributing his fourth-place finish in Iowa and fifth-place finish in New Hampshire to voter demographics.”He might not have expected them to have been as tough as they were,” she said. “But, you know, we always saw this as a grouping of four states — the first two and the second two. We knew that once we got to more favorable terrain and the second two, it would be in a more advantageous contest for us.”In light of his slipping ranks and the momentum of his opponent Vermont Sen. Bernie Sanders, the current frontrunner for the Democratic ticket, Biden has leaned into his base of African-American voters. More than two-thirds of the Democratic electorate in South Carolina is African-American, and Dunn said this will give him “significant political support.””I think South Carolina has always been a special state for Joe Biden,” Dunn said when Klein asked about his connection to the state. “He has a lot of friends down here and a lot of relationships down here that pre-date his relationship with [former President] Barack Obama.”Biden was one of seven candidates on a crowded Democratic debate stage in Charleston on Tuesday night, leveraging his previous work with foreign leaders and taking jabs at Sanders for his voting record on the Brady Bill — a law that mandates a federal background check for all gun owners.After Klein questioned Dunn about Biden’s likelihood of defeating Sanders with so many candidates on the ballot, she likened the primary season to that of 1992 — when former President Bill Clinton lost 12 primaries before winning one.”This is clearly going to be a contest that is going to go through the entire primary season as 2008 did, as 2016 did, as 1992 did,” she said. “I don’t see anybody wrapping this one up early.”House Majority Whip and longtime South Carolina Congressman Jim Clayburn announced his endorsement of Biden Wednesday morning, a development Dunn says has the campaign feeling “very good.”Just days before the New Hampshire primary in early February, Dunn was elevated to a senior adviser position on Biden’s campaign. Before then, she had been leading his debate preparation and occasionally travelling with him.Dunn was also a senior adviser to Obama during his 2008 election campaign — and served as acting White House communications director from April through November 2009 under the Obama administration.She is currently the managing director at SKDKnickerbocker, a progressive public affairs and consulting firm.Powerhouse Politics podcast is a weekly program that posts every Wednesday, and includes headliner interviews and in-depth looks at the people and events shaping U.S. politics. Powerhouse Politics podcast is hosted by ABC News Chief White House Correspondent Jonathan Karl and ABC News Political Director Rick Klein.Copyright © 2020, ABC Audio. All rights reserved.

Nolan Gould jokes that after Modern Family ends, he’ll be unemployed for the first time in a decade
Single-use plastic gloves seem like a good idea during coronavirus, but here’s the problem
‘The Nanny’ cast reunites for a Zoom read-through of the show’s first episode
Birx avoids treating her grandchild with high fever, cites fear of infecting Trump
US works to assure allies, deny allegations of seizing supplies in ‘mask wars’
Coronavirus government response updates: Navarro warned White House of virus danger in January