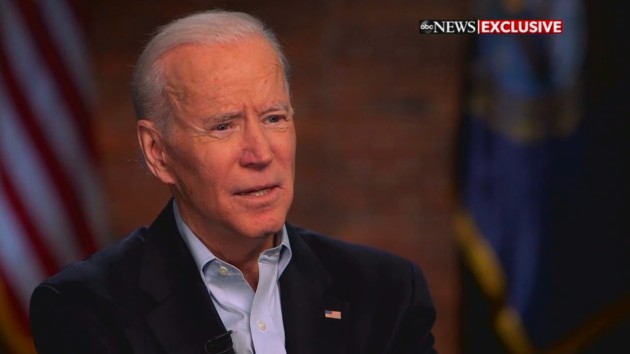 (NORTH CHARLESTON, S.C.) — Former Vice President Joe Biden scored a key endorsement from one of South Carolina’s most influential political figures, just days before the state’s crucial primary.House Majority Whip and longtime South Carolina Congressman Jim Clyburn ended months of speculation on Wednesday, announcing at a press conference in North Charleston that he is backing Biden’s bid.”I’ve been saying to the media. I’ve known for a long time who I’m going to vote for. But I had not decided whether or not to share it with the public,” Clyburn said. “But I want the public to know that I’m voting for Joe Biden, South Carolina should be voting for Joe Biden.”Clyburn credited an elderly woman at a funeral asking him who he intended to vote for as the catalyst for his announcement. “She said, ‘You don’t have to say it out loud. Would you just whisper into my ear. Who are you gonna vote for next Saturday? I’ve been waiting to hear from you. I need to hear from you. This community wants to hear from you.’ I decided then and there that I would not stay silent,” Clyburn said, recalling the recent conversation. “I know Joe. We know Joe. But most importantly, Joe knows us,” Clyburn said on Wednesday, announcing his endorsement at a pivotal time for Biden and his campaign, which had been dogged by disappointing results in the first two nominating contests in Iowa and New Hampshire — rebounding only slightly with a second place finish in last week’s Nevada caucuses.When accepting Clyburn’s endorsement, Biden got emotional. “It’s hard to know what to say, for real,” he said. The former vice president also had kind words for the South Carolina lawmaker. During a National Action Network breakfast just before the press conference announcing the endorsement, Biden praised Clyburn’s character.”A lot of folks talk the talk. Very few people walk the walk. And Jim Clyburn is a man of enormous integrity,” Biden said. “Jim, you’re one of the finest men I’ve ever met. Not just in public life, but period.” At the endorsement, Biden credited Clyburn with always keeping the public’s interest at the center of his work, and took a thinly veiled jab at the current frontrunner in the race, Vermont Sen. Bernie Sanders.”[Clyburn] always reminds us — reminds everyone on both sides of the aisle — that it’s about you family and community. It’s about whether or not we can make a difference in people’s lives,” Biden said. “It’s just pretty simple, but all too often, all too often, people get to public office began to think about them.” He added, “Today, people are talking about a revolution. What the country’s looking for are results, what they’re looking for is security, what they’re looking for, is being able to sustain and maintain their dignity.”The endorsement also comes at a critical time in the Democratic primary, and just three days before the Palmetto State’s pivotal primary. “I will win the African American vote here in South Carolina,” Biden said. “I will win South Carolina.” Biden expanded even further in an interview following Tuesday’s debate in South Carolina, saying he thought even a one-point win would be enough to propel him into Super Tuesday contests. But, he predicted: “I think I’m going to win by a lot more than that.”Despite the slow start — stumbling early on in the 2020 race following disappointing finishes in Iowa and New Hampshire, coupled with Sen. Bernie Sanders’ early delegate lead — his team maintains they are well positioned for a long primary race.”We believe it’s going to be a long race, ladies and gentlemen, and again on Super Tuesday about one third of the delegates needed in this race are up for grabs,” Symone Sanders, a Biden campaign adviser, told reporters on Tuesday. “This is just getting started,” she said.Copyright © 2020, ABC Audio. All rights reserved.

Louisiana police apologize for using siren from ‘The Purge’ to signal coronavirus curfew
Oops: Cops in Louisiana apologize for blaring the siren from ‘The Purge’ to warn of a COVID curfew
Utah Rep. Ben McAdams on COVID-19 recovery: ‘It hit me really hard’
Damaging winds, hail and tornadoes forecast from Midwest to the South
1,300 NYC first responders back at work after recovering from coronavirus or its symptoms
Ryan Reynolds tweets “weirdly appropriate” scene from ‘Free Guy’, given COVID news cycle