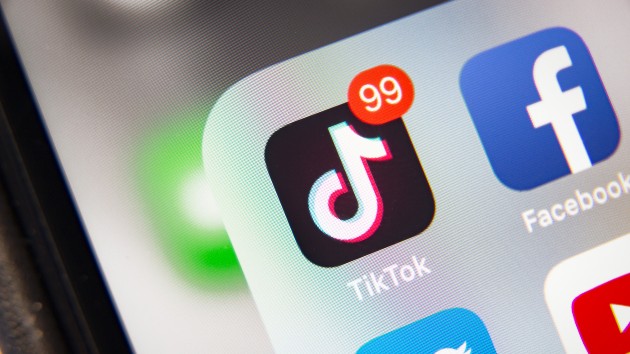 (NEW YORK) — The Transportation Security Administration has banned its employees from using TikTok to create content for the agency after facing pressure from lawmakers over the social media platform’s ties to China.The announcement comes after Sen. Chuck Schumer, D-NY, sent a letter blasting the federal agency for still using the app — which is especially popular among young people — even after the Pentagon and Department of Homeland Security banned it.”The TSA is to be recognized for its work to engage a variety of stakeholders with airline rules and safety, but it also must acknowledge the ironic risk it’s placing its own agency — and potentially the public — in with its continued use of the China-owned TikTok app,” Schumer said in a statement Sunday.”Given the widely reported threats, the already-in-place agency bans, and the existing national security concerns posed by TikTok, the feds cannot continue to allow the TSA’s use of the platform to fly,” he added.Schumer accused the TSA of posting TikTok videos on agency accounts even as TikTok was being federally probed, pointing to a viral “nopes” and “yeps” of carry-on luggage and a “romantic tips” for travelers videos.”These videos sure do make you chuckle; they’re creative,” Schumer said. “But China might be laughing at these TSA postings for very different reasons, and that should concern us and it’s why I am urging the TSA to find a different platform, and cease its use of TikTok now.”A spokesperson for the TSA told ABC News Monday that the agency has an “award-winning presence on several social media platforms” but that it has never published any content to TikTok or directed viewers to it.”A small number of TSA employees have previously used Tik Tok on their personal devices to create videos for use in TSA’s social media outreach, but that practice has been discontinued,” the spokesperson added. Copyright © 2020, ABC Audio. All rights reserved.

Mila Kunis shares the “parenting fail” her husband Ashton Kutcher called her out over
As White House announces vaccine plan for kids 5-11, states prepare for complex rollout
Johnson & Johnson looking to bankruptcy to resolve 40,000 baby powder cancer suits
‘The ﻿Wendy Williams Show’ ﻿to continue with guest hosts into November
‘The Bachelorette’ recap: Michelle meets the men, and finds a cheat among them
Senate Republicans expected to once again defeat voting rights reform bill