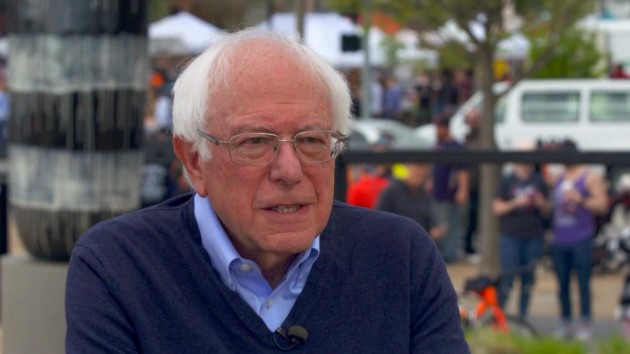 (WASHINGTON) — The last debate may have been a pile on for former New York City Mayor Mike Bloomberg, but with a decisive victory in Nevada under his belt, Sen. Bernie Sanders has solidified his front-runner status in the Democratic primary and his competitors have sharpened their attacks on the Vermont senator, questioning his electability in the lead-up to Tuesday night’s debate in South Carolina.”I’d like whomever the Democrat is to beat Donald Trump. I’d vote for Mickey Mouse over Donald Trump,” former Vice President Joe Biden, who finished second in Nevada, said on MSNBC Sunday. “I don’t think (Sanders) can beat Donald Trump, and … get a Democratic Senate and keep a Democratic House.”Seven of the eight remaining candidates vying to take on the president will face off in the debate: Biden, Bloomberg, former South Bend, Indiana, Mayor Pete Buttigieg, Minnesota Sen. Amy Klobuchar, Sanders, businessman Tom Steyer and Massachusetts Sen. Elizabeth Warren, according to an ABC News analysis.The debate, which is being hosted by CBS News and the Congressional Black Caucus Institute, in partnership with Twitter, runs from 8 p.m. to 10:15 p.m. (EST).And while the knives may be out and aimed at Sanders, this debate is not just the last opportunity these candidates have to differentiate themselves on a national stage before the South Carolina primary, it’s also the last chance to do so before 14 states and one territory vote on Super Tuesday, when a third of all pledged delegates will be up for grabs.Both Buttigieg and Klobuchar have questioned Sanders’ ability to bring a big enough coalition of voters together to beat Trump in the general election, with Buttigieg saying Sanders’ brand of politics is “my way or the highway.”But the two candidates are sure to face questions about their own electability and ability to appeal to a diverse electorate, given about 60% of South Carolina Democratic primary voters were black in the 2016 election, according to ABC News exit poll results.In Nevada, Buttigieg and Klobuchar were only supported by 2% and 3%, respectively, of black caucusgoers, according to entrance poll results, compared to 39% who supported Biden and 27% who supported Sanders.Bloomberg also has something to prove. In the last debate, while he took on Sanders, the billionaire struggled to take the heat from his rivals, even admitting on MSNBC Sunday, “It wasn’t my best night.”He hasn’t campaigned or been on the ballots in the early voting states, including the upcoming primary in South Carolina, so the debates are his chance to prove that he’s the best candidate to take on Trump in the general election as he’s claimed in many of his hundreds of millions of dollars’ worth of television ads.His campaign rescheduled a Monday CNN town hall so that he could prepare for the debate.”The country can’t afford to let Bernie Sanders skate by another debate without a focus on his extreme record,” spokeswoman Galia Slayen said in a statement provided to ABC News.With Sanders’ two clean wins, and lead in the delegate race, Bloomberg may be spared from attacks on his extreme wealth and record on women and race as the moderates on stage pivot to take on the Democratic front-runner, who doesn’t even identify as a Democrat in the Senate.Even Warren, the only other candidate in the race to support a government-run health care system, sought to differentiate herself from her liberal comrade when asked by a supporter at an event in Denver about how people can benefit from democratic socialism.”I appreciate the question, but you’ve got the wrong person to ask about this,” Warren said Sunday. “I’m not a democratic socialist. I believe in the markets.”While Warren’s had less-than-stellar results out of the first contests of the cycle, her campaign raised more than $5 million in the 24 hours following the Las Vegas debate — when Warren didn’t hold back, taking on several of her competitors. Another fundraising night like that would be welcome for the campaign, which spent more than twice the amount it raised in January, ending that month with $2.3 million in cash on hand, according to the latest Federal Election Commission filing.Having failed to qualify for the last debate in Las Vegas, a strong showing from Steyer could put him on the path to scoring delegates — and momentum — in Saturday’s primary, his last opportunity to do so before Super Tuesday after a lackluster finish in Nevada.The billionaire has spent more than $21 million on television ad buys in South Carolina, according to ad data analysis from CMAG, and his investment has paid off, according to polling. In October, Winthrop University’s poll had Steyer at just 2% support among Democratic and Democratic-leaning voters. Less than a week ago, he was at 15% among the same group, trailing only Biden and Sanders.While Steyer has made gains in the Palmetto State, Biden — who’s hoping for a resounding win on Saturday — has remained confident the billionaire wouldn’t spoil his victory. He told ABC News on Monday that he can win the state “by plenty.”

And in North Charleston on Sunday, Biden was asked by a reporter how much of the vote Steyer would “take” from him this weekend.”I think the same amount he took in Nevada. Nothing,” Biden quipped. Steyer finished in fifth place.Unlike Nevada, there’s no early voting in South Carolina, so this debate is timed to potentially sway voters. A strong showing at the Gaillard Center could bolster the former vice president as he tries to smash the narrative that he’s lost his standing in the southern state where he once overwhelmingly led in polls.