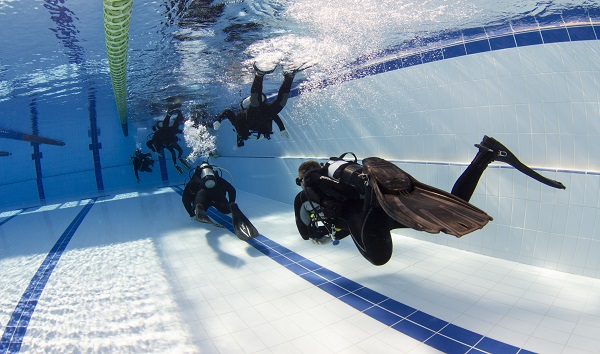 (LOS ANGELES) — Kelly McCumiskey will never forget the day she decided to try scuba diving.Suffering from post-traumatic stress disorder (PTSD) and confined to a wheelchair, the Air Force veteran hoped that her first dive would be her last.“I was just not a happy person,” McCumiskey, 60, from Los Angeles said. “My idea was I can kill myself and nobody would realize that I did it so I don’t shame my family or the military.”But instead of dying, diving saved McCumiskey’s life.“We go down and we hit 35 feet and I was like, I must have died — there’s something majorly wrong,” McCumiskey said. “I didn’t realize the feeling I was having was I was out of pain. When we came back on the boat and I didn’t need any pain meds at all, my life changed.”Diving actually saved my life.”McCumiskey is one of the founding members of Dive Warriors — a nonprofit based out of Long Beach, California that teaches disabled veterans how to scuba dive. Once a month, the group takes former armed service members to the Pacific Ocean where they dive as a team, free of charge.“Every time I hit the water, I go he-he-he,” McCumiskey said. “I never realized they could literally hear me from the boat laughing underwater as I’m going down through my bubbles. It totally brings me back to life.”The program provides essential water therapy for those who need it. Jared Lemon, 39, from Temecula, California, lost an arm during his second deployment with the Army in Afghanistan. He said he struggles with phantom limb pain and PTSD.“The second I go underwater — Boom!! It goes away,” Lemon said. “It is straight up therapeutic and when I come up, it’s like a reset before the pain begins to build back up again.”Therapy isn’t the only factor that brings the group together. Many veterans say the program lets them experience the camaraderie they felt while serving. Mike Randell, 50, from Las Vegas, is a Gulf War veteran who has been a part of Dive Warriors for three years now. He drives more than four hours each way just to be a part of the mission.“It’s an extremely special bond,” Randell said. “A lot of us have the same injuries. We understand the pain, the horror, the misery each of us experienced. It’s about the team here and it gave me a whole new outlook on life. Dive Warriors really saved my life.”A recent government study found veteran suicide on the rise in the United States and a rate of death much higher than the civilian population. More than 6,000 veterans took their lives in 2017 alone, a 6% increase than the year before. Dive Warriors hopes to change that by providing a support network that veterans feel they can rely on.“You build a special bond because you’re back to your military mindset,” McCumiskey said. “You got their six no matter what happens. That’s your battle buddy right there. When you get that call at 3 o’clock in the morning because somebody’s suicidal that night, you’re able to talk them off the ledge because of that relationship and military mentality built from dives like this.”If you are in crisis, please call the National Suicide Prevention Lifeline at 1-800-273-TALK (8255) or contact the Crisis Text Line by texting TALK to 741-741.Copyright © 2020, ABC Audio. All rights reserved.

In a guest article for ‘TIME’, Angelina Jolie warns how self-isolation can increase abuse of children
Self-isolation fan Pauley Perrette says her new show, ‘Broke’, is the perfect for the quarantine blues
From scarves to HEPA filters, what kind of face covering is best?
Day of Hope: How to help food banks on the front lines of the COVID-19 crisis
COVID-19 is killing the black community disproportionately. Experts weigh in on fixes
Employees at veterans’ home with deadly outbreak say management ‘failed’ them