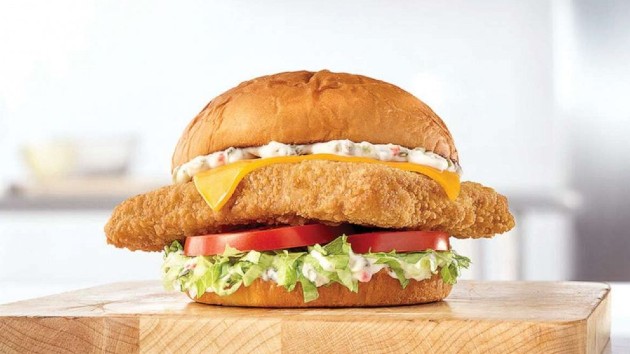 (NEW YORK) — As Catholics prepare for Lent, fast-food chains are looking to hook some new customers with specialty seafood menu items to capitalize on the meat-free Friday fast. The golden arches at McDonald’s have long been home to a popular Lent option with its Filet-O-Fish sandwich and now two competitors are wading into the waters, which has created a bit of a surf war online.Arby’s may be known for having the meats, but for a limited-time, it will dive into seafood fare.The fast food restaurant made a splash on social media with a tweet thread about its new menu items, which churned up some choppy responses online.Arby’s will offer three fish sandwich options for customers: a King’s Hawaiian Fish Deluxe, Crispy Fish and Fish N’ Cheddar.Earlier this week, a Southern favorite also announced the return of its own fresh catch option. “After a long off-season, the Bojangles’ BojAngler fish sandwich is back on the Southern restaurant chain’s menu,” the restaurant announced in a press release.Chef Marshall Scarborough, Bojangles’ vice president of menu and culinary innovation, said the sandwich is made with wild-caught Alaskan Pollock, dusted in Bojangles’ fry seasoning, topped with a slice of American cheese and tartar sauce, between a toasted and buttered bun. “There are plenty of fish sandwiches in the sea, but this sandwich boasts what others cannot: that one-of-a-kind Bojangles’ flavor that leaves you craving more,” Scarborough said of the limited-time menu item which will also be available a la carte and as a dinner platter. Lent begins on Feb. 26 and goes through April 9, which is known as Holy Thursday in the Catholic church. In previous years, other restaurants have gone above and beyond to catch the attention of Catholics abstaining from meat. Red Robin even invited Pope Francis to lunch in 2015 at its Colorado-based burger location when it first introduced its Wild Pacific crab cake burger. “If His Holiness accepts and visits any U.S. location between February 18 and April 2, Red Robin will offer The Wild Pacific Crab Cake Burger to guests for free, while supplies last, on the remaining Fridays during Lent,” the company said at the time. Some practitioners of the Christian season of Lent, which begins on Ash Wednesday and lasts 40 days ahead of Easter, exercise personal sacrifices such as abstaining from meat.McDonald’s has offered its Filet-O-Fish sandwich for just $1 during Lent and reportedly sees an increase in sales in the fish sandwich around that time of the year. The sandwich was created by the franchisee of the first McDonald’s in Cincinnati in 1962 in part to cater to the predominantly Roman Catholic customers. Other fast-food restaurants have also seen a rise in seafood sales during Lent. “During Lent, we see 25 to 40% increases in our weekly unit volumes,” Long John Silver’s chief marketing officer Charles St. Clair told Quick Service Restaurant magazine. “The awareness that gets generated this time of year helps throughout the year.” Heather Metzler, former director of brand marketing for Arby’s, told the magazine that since 2008, Arby’s has brought its wild Alaska Pollock fish sandwich back every year during Lent. Last month, Arby’s introduced its “King’s Hawaiian Fish Deluxe sandwich, available through March. Arby’s sold 11.8 million Reel Big Fillet sandwiches last year, compared with 8.7 million in 2012. “Our customers have come to expect it, and we are gaining more interest every year,” she said. Copyright © 2020, ABC Audio. All rights reserved.

House passes bill that would prohibit discrimination against LGBTQ Americans after days of heated debate
Marvel villain struggles with work-life balance in preview of Hulu’s animated ‘M.O.D.O.K.’
Dems, GOP at odds over scope of proposed commission on Jan. 6 Capitol attack
Minority TikTok influencers are bringing awareness of COVID-19 vaccines to their communities
#MeToo, Time’s Up and National Women’s Law Center launch campaign for Black survivors of sexual violence
Becca Cosmetics is going out of business after 20 years