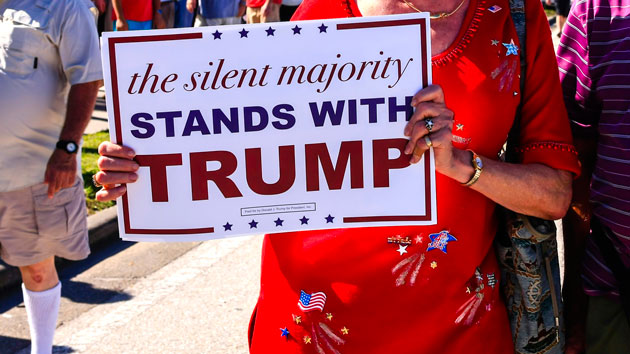 (PHOENIX) — President Donald Trump is kicking off a West Coast campaign swing Wednesday with a rally in Phoenix, the capital of a state he lost in 2016 but hopes to flip in 2020.Trump’s event at the Arizona Veterans Memorial Coliseum marks the first of three rallies in three states in three days — his biggest reelection-related time investment this cycle.Following his stop in Arizona, Trump will take his road show to Colorado on Thursday and then Nevada on on Friday, the day before the crucial Democratic Nevada caucus.The Arizona rally is another attempt by the president to counter Democrats, who have a critical debate Wednesday night featuring Sen. Bernie Sanders, who’s surging in the polls, and Mike Bloomberg’s first such appearance.Trump supporters in Arizona waiting in line hours before the event said they’re unfazed by Bloomberg’s unprecedented spending ahead of the former New York City mayor’s debate debut.”I think it’s fabulous,” Ronda Dooley told ABC News. “I wan’t him to pour more and more money after a dream that I don’t think would be able to come to fruition.”Oscar Lopez, another Trump supporter, said he’s worried about Bloomberg, reiterating a familiar attack the president’s used against the billionaire.”I know that they are joking and saying that he’ll stand on a box, because he’s supposed to be a little guy, little Mike or whatever,” Lopez told ABC News. “We’ll see.”With Friday’s Nevada rally a day before the state’s Democratic caucus, Trump’s trip is a prime example of the president’s desire to counter each event on the Democrats’ calendar, refusing to cede a single news cycle.But the president’s trip is more than just counterprogramming — he’s planning to bring home millions of dollars for his reelection campaign thanks to two high-dollar California fundraisers.A source familiar told ABC News that Trump may raise $14 million.The president held a fundraiser on Tuesday in Beverly Hills with around 300 attendees and will head to another in Rancho Mirage on Wednesday with 60 attendees. The latter event, at Oracle Chairman Larry Ellison’s California golf course and estate, marks a major tech mogul publicly backing the president, potentially a huge win for Trump in an election year.Copyright © 2020, ABC Audio. All rights reserved.