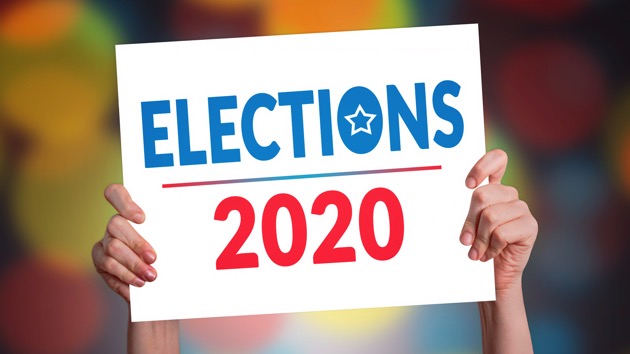 (NEW YORK) — Vermont Sen. Bernie Sanders has soared and former Vice President Joe Biden has crashed in national preference for the Democratic nomination for president, while the Iowa caucuses and New Hampshire primary helped to clear some running room for a candidate who’s not yet been on the ballot: former New York Mayor Mike Bloomberg.Sanders advanced to 32% support among Democrats and Democratic-leaning independents in the latest ABC News/Washington Post poll, up 8 percentage points from late January. Biden fell to 17%, down 11 points to his lowest of the campaign. And Bloomberg, who takes the stage for the first time in Wednesday night’s debate in Nevada, now has 14% support, up 6 points.See PDF for full results, charts, and tables.By contrast, there’s been little if any movement for former South Bend, Indiana, Mayor Pete Buttigieg, a strong finisher in both early contests; Minnesota Sen. Amy Klobuchar, third in New Hampshire; or Massachusetts Sen. Elizabeth Warren, who fell short in both. Warren has 11% support nationally, unchanged; Buttigieg, 7%; and Klobuchar, 6%.Sanders’ newfound 15-point lead over Biden nearly doubles Biden’s biggest lead of the campaign, 8 points over Sanders in early September. That said, the most dramatic shifts aren’t in vote preferences but in views of who has the best chance to defeat President Donald Trump in November. Electability’s been a cornerstone of Biden’s campaign, yet just 19% now say he’s likeliest to win, sliced in half from 38% in January.Instead, 30% of leaned Democrats now see Sanders as most electable, up 12 points, and 18% say this about Bloomberg, up 10 points. The rest of the field is in single digits on the question.Among groups, Biden’s support among blacks has declined from 51% last month to 32% now; he’s been looking for support from blacks as a boost to his campaign in the South Carolina primary on Feb. 29. He lags with just 11% among whites. Sanders, meanwhile, is prevailing among Hispanics, potentially an influential group in the Nevada caucuses this Saturday. Nonwhites overall – who account for half of all Democrats and Democratic-leaning independents – have gone from 35-28 percent, Biden-Sanders, last month, to 35-22 percent, Sanders-Biden, now.General election matchups have changed little from January in this poll, produced for ABC by Langer Research Associates. Sanders, Bloomberg and Biden lead Trump by 8 to 11 points among all adults, but it’s close among those who are registered to vote. Biden holds a slight 7-point edge over Trump among those who are registered to vote, while Sanders’ +6 and Bloomberg’s +5 fall short of statistically significant leads. All these extend January’s contraction after sizable Democratic leads in the fall, with Trump boosted by the economy.

TrumpTrump’s job approval rating is mostly steady at 43%, a point off his career-high, 44% last July and again last month. His approval rating for handling the economy is higher, 52%, after peaking at 56% last month.On the economy, 53% of Americans say they’re holding steady financially, 29% getting ahead and 16% falling behind. It’s a key measure; a huge advantage for Trump among those who say they’re getting ahead financially largely compensates for his trailing position among those who are holding steady or falling behind.Trump’s support in general election matchups is very consistent – 42 to 45% among all adults and 45 to 47% among registered voters, regardless of the six potential Democratic opponents tested. That’s associated, naturally, with his job approval rating; 91 to 94% of his approvers support him for re-election. With re-election campaigns constituting a referendum on the incumbent, it’s the reason to watch Trump’s approval score – and the economy, which influences it – closely in the months ahead.Trump retains two dubious distinctions: He’s the first president in modern polling never to have achieved majority approval, and his career average rating is the lowest on record. He’s at a new low in approval among Democrats (4%) and a high among Republicans (88% up 14 points from late October), for the widest partisan gap since he took office. He’s got 46% approval among independents, often a swing group in national politics.Another measure also marks the partisan divisions on Trump: Twenty-six percent of Americans say his behavior as president has “changed for the worse” since his acquittal on impeachment charges last month. That rises to 50% among Democrats, vs. 3% of Republicans, with independents between the two.The DemocratsDefeating Trump in November is the party’s prime motivation, and a potential limiting factor for Sanders despite his gains on the electability question. Democrats and Democratic-leaning independents by 58-38% say they’d prefer a candidate who can beat Trump over one who agrees with them on major issues. Sanders wins 46% support among those chiefly focused on issues, a margin that’s largely responsible for his lead overall. That drops to 21% among the majority that cares more about defeating Trump, with Biden and Bloomberg competitive in this group.At the same time, Sanders is boosted within the party by his support for a government-run, single-payer health care system to replace private insurance. Leaned Democrats back this approach by 62-34%. Among the majority who are single-payer supporters, Sanders has 44% support; among opponents of that system, just 12%.On another front, Sanders doesn’t face trouble within the Democratic ranks based on his self-definition as a Democratic socialist or socialist. (He’s used both terms.) Given the “Democratic socialist” label, 20% of Democrats and Democratic-leaning independents say they’re more likely to support him, vs. 8% less likely – a net positive. (Liberals are especially accepting of the term.) Using “socialist,” it’s a wash – 12% more likely, 13% less so. Two-thirds or more say it doesn’t matter to them.Both the label and Sanders’ position on health care may be less helpful, though, in a general election. Americans overall are more apt to oppose than to support single-payer government health care, 52-41%. And Sanders’ calling himself a democratic socialist or a socialist turns into a net negative in vote intention among all adults; they’re less likely rather than more likely to support Sanders by 31-11% given the democratic socialist label and by 38-8% as a socialist. The share saying it makes no difference drops closer to half.Similarly, about a third of all adults call Sanders “too liberal,” compared with about a quarter who say the same of Biden or Bloomberg. That said, 20% call Sanders too conservative.Within the Democratic primaries, the competing forces of electability and views on health care are key for Sanders. So too, potentially, is the fate of the now-lagging Warren. Were she not in the race, a plurality of her supporters say they’d shift to Sanders (based on aggregated results from the last two ABC/Post polls for an adequate sample size). That said, were Biden to go, a quarter of his support could be Sanders-bound.Among demographic groups, Sanders’ support remains focused among liberal (and especially very liberal) leaned Democrats and young adults. He has a vast 56% support among 18- to 39-year-olds, diving to 13% among those age 65 and older. Among seniors, by contrast, Bloomberg reaches 24 percent; Biden, 20%.Sanders’ 41% among liberals falls to 25% among moderates, who account for more than four in 10 leaned Democrats (44%). Biden wins 24% of moderates, Bloomberg 17%. At the same time, relatively few leaned Democrats call Sanders “too liberal,” 17%; indeed, as many call him too conservative. The only significant ideological objections to any of the other leading candidates are to Klobuchar, seen as too conservative rather than too liberal by a 9-point margin, and Biden, the same by 6 points.For his part, Bloomberg, despite controversies over “stop and frisk” policing in New York during his mayoralty, has about as much support from blacks (14%) and nonwhites generally (12%) as among whites (16%). Further, though he’s been accused of sexism, his support is slightly higher among women (17%) than men (10%).In a general election matchup among registered voters against Trump, moreover, Bloomberg is supported by 60% of women (vs. 39% of men) and by 71% of nonwhites (including 91% of blacks). Results among other leading Democrats are similar.A final result finds some apprehension among leaned Democrats about their chances in November. About seven in 10 think Sanders, Biden or Bloomberg would beat Trump; that leaves about a quarter who think Trump would win these matchups. More – four in 10 – think Trump would beat either Warren or Buttigieg, and nearly half think he’d defeat Klobuchar.MethodologyThis ABC News/Washington Post poll was conducted by landline and cellular telephone Feb. 14-17, 2020, in English and Spanish, among a random national sample of 1,066 adults. Results have a margin of sampling error of 3.5 points, including the design effect. Partisan divisions are 29-25-37 percent, Democrats-Republicans-independents.The survey was produced for ABC News by Langer Research Associates of New York, N.Y., with sampling and data collection by Abt Associates of Rockville, Md. See details on the survey’s methodology here.Copyright © 2020, ABC Audio. All rights reserved.