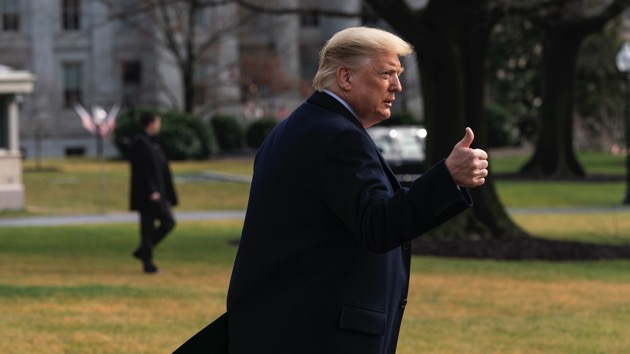 (WASHINGTON) — President Donald Trump has commuted the sentence of former Illinois Gov. Rod Blagojevich.Blagojevich, a Democrat, was convicted in 2011 by a federal jury in Chicago on 17 counts, including an attempt to sell the U.S. Senate seat vacated when President Barack Obama was elected in 2008.He was sentenced to 14 years in prison and has been serving his prison time at a Colorado federal prison since 2012. His date for expected release was 2024, factoring in two years of credit for good behavior.”He served eight years in jail, that’s a long time, and I watched his wife on television, I don’t know him very well, I met him a couple of times, he was on for a short time on ‘The Apprentice’ years ago, seemed like a very nice person, don’t know him, but he served eight years in jail, there’s a long time to go,” Trump said Tuesday. “He’ll be able to go home to his family after serving eight years in jail, that was a tremendously powerful, ridiculous sentence in my opinion.”

JUST IN: Pres. Trump says he has commuted former Illinois Gov. Rod Blagojevich’s sentence, calling it a “tremendously powerful, ridiculous sentence,” and claiming “it was a prosecution by the same people, Comey, Fitzpatrick, the same group.” https://t.co/HH71d2cc41 pic.twitter.com/03011c270V

Trump has long floated the idea of commuting his sentence and said that he thinks Blagojevich had served enough time and been treated unfairly.”I am thinking very seriously about commuting his sentence so that he can go home to his family after seven years,” Trump said in August of last year. “You have drug dealers that get not even 30 days, and they’ve killed 25 people. They put him in jail for 18 years, and he has many years left. And I think it’s very unfair.”In January, Blagojevich penned a column on Newsmax titled, “House Democrats Would Have Impeached Lincoln” amid the now-wrapped congressional impeachment efforts against Trump. While Blagojevich didn’t mention Trump’s name in the column, his wife Patti Blagojevich tagged the president’s name as she retweeted the piece.Blagojevich appears to defend Trump in the column against House Democrats’ efforts, comparing the impeachment proceedings with his own criminal case, and calling the House impeachment vote an “abuse of the Constitution.””No president is safe if a majority of hyperpartisan House members from the opposition party are willing to abuse the Constitution and vote to impeach,” Blagojevich wrote. “And the worst part of it is, that should this happen, those politicians are taking from the people their right to choose their own leaders though free elections.”While in prison, the disgraced governor rose to fame in part because of his penchant for sartorial flamboyance, larger-than-life persona and an apparent eagerness to perform for the camera. He became known through tabloids by the mononym “Blago,” and the Chicago Tribune reported that inmates inside of the prison refer to him simply as “Gov.”In 2009, he appeared on NBC’s “The Apprentice,” a reality TV show hosted by Trump.Blagojevich also fronted a prison band called “The Jailhouse Rockers,” which his defense team used as an example of his good behavior during his appeal to no avail.Copyright © 2020, ABC Audio. All rights reserved.