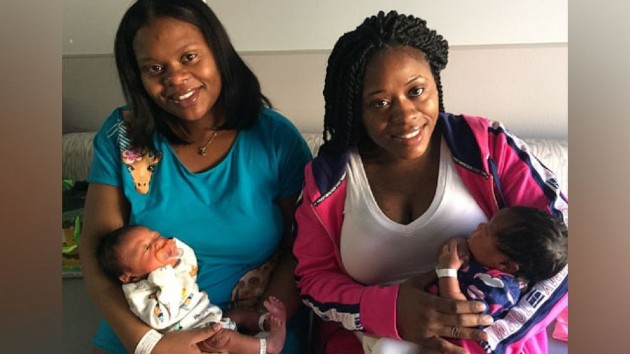 (INDIANAPOLIS) — Charell Anthony and Cierra Anthony, sisters who both live in Indianapolis, plan to raise their newborn babies as “cousin twins.” The sisters gave birth to their healthy newborns on the same day, Feb. 12, at the same hospital, Community Hospital East in Indianapolis. “They’re going to be really close,” Charell Anthony told ABC News’ Good Morning America of her son, Terry Valentino, and her sister’s daughter, Dream Monique. “Being born on the same day, that’s going to be really special for them.”Charell Anthony, 26, gave birth to her son Terry at 12:40 a.m. on Feb. 12. He weighed 6 pounds, 2 ounces.Her due date was Feb. 20 but she rushed to the hospital after her water broke while she was at the library.Cierra Anthony, 28, came to visit her younger sister in the hospital and told her she was going to be induced that same day. She gave birth to her daughter Dream at 6:29 p.m. on Feb. 12. Dream was a week late and weighed 7 pounds, 4.4 ounces, according to her mom. The two sisters stayed in the hospital in rooms one room away from each other. They described a happy but chaotic and funny scene of their seven siblings plus their mom and dad and extended family members going back and forth between the two rooms meeting the newest members of the family.”They were so excited,” said Cierra Anthony, who shares a Jan 14. birthday with one of her younger sisters. “Nobody could believe it.” The overflow of visitors led to the newborns going without official names until three days after their births, both sisters said. Cierra and Charell Anthony wanted to give their children names that both started with the letter “j,” but their husbands disagreed. That led other family members to weigh in, according to Charell Anthony.”It was complicated because everyone was going room to room discussing what names they wanted,” she said. “For days, we couldn’t agree.” “Our last few hours [in the hospital], no one was there with us so we named the kids then,” Charell Anthony added. The newborn babies give the sisters a total of six children between them. “We pretty much do raise all our kids as siblings,” said Charell Anthony. “We’re really close.”