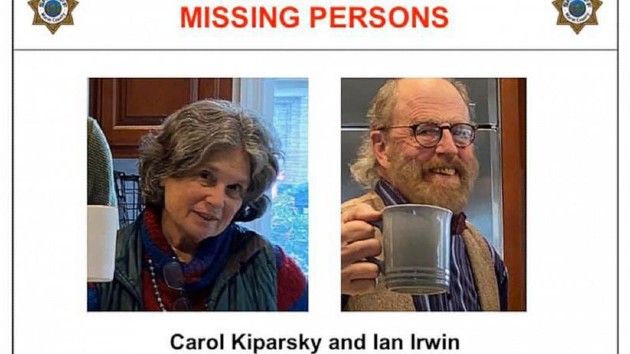 (SAN FRANCISCO) — A search is intensifying in Northern California for a man and woman in their 70s who vanished without a trace. Carol Kiparsky, 77, and Ian Irwin, 72, have been missing since noon on Friday, Feb. 14, according to the Marin County Sheriff’s Office.They were last seen at a rental home in Inverness/Seahaven. “They were supposed to check out Saturday morning, but all of their belongings including phone, wallets and vehicle were left at the vacation cottage,” according to a statement from the sheriff’s office.Kiparsky and Irwin also missed an appointment on Sunday. Authorities called this “highly out of character for them.” Over 130 people from across the Bay Area helped in the search Monday by ground and air, authorities said.There’s no evidence of foul play, Sgt. Brenton Schneider of the Marin County Sheriff’s Office told ABC San Francisco station KGO-TV. “We are still considering this a search and rescue. This hasn’t gone to a recovery,” Schneider told KGO. “We still believe there is a strong likelihood they could still be alive, and that is why we have so many ground crews out looking for them.” Anyone with information is asked to call the Marin County Sheriff’s Office at 415-479-2311.Copyright © 2020, ABC Audio. All rights reserved.