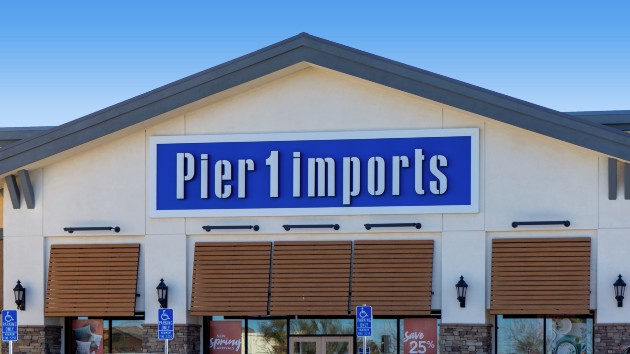 (NEW YORK) — Mall furniture chain Pier 1 Imports announced Monday it has filed for Chapter 11 bankruptcy, as it continues to look for a buyer. The company said it will close up to 450 stores, including all of its stores in Canada, as part of the bankruptcy proceedings. The store closures were previously announced, and to date the company has closed or initiated going-out-of-business sales at more than 400 locations.Pier 1 said it will also shutter two distribution centers.”Today’s actions are intended to provide Pier 1 with additional time and financial flexibility as we now work to unlock additional value for our stakeholders through a sale of the Company,” Robert Riesbeck, Pier 1’s CEO and CFO, said in a statement. “We are moving ahead in this process with the support of our lenders and are pleased with the initial interest as we engage in discussions with potential buyers,” he added.As for now, Pier 1’s remaining stores and e-commerce platform remains open and operating, the company said, adding it hopes to operate business as normal over the course of this process. The company said it intends to complete the sale through a Chapter 11 plan and a tentative deadline for bids will be on March 23. Pier 1 joins a growing list of brick-and-mortar retailers that have struggled in recent years with the rise of e-commerce giants and changing consumer tastes. Once a mall staple, Macy’s announced a massive restructuring earlier this month that will involve closing 125 stores. Fellow mall chain Forever 21 filed for bankruptcy in late September, though it announced last month it may have found a buyer. In late 2019, Iconic New York City-based retailer Barneys filed for bankruptcy.Copyright © 2020, ABC Audio. All rights reserved.