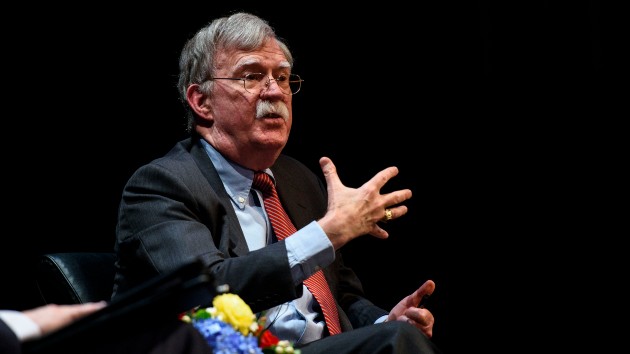 (DURHAM, N.C.) — Former national security adviser John Bolton, speaking out for the first time since the conclusion of President Donald Trump’s impeachment trial, discussed his upcoming book and expressed serious concerns about the White House review process that he claimed is holding up its publication.Bolton labeled the review process as “censorship.””I say things in the manuscript about what [Trump] said to me; I hope they become public someday,” Bolton said during an interview in front of an audience at Duke University on Monday evening. “He tweets, but I can’t talk about it — how fair is that?”Bolton’s book, which contains allegations regarding Trump’s personal involvement with activities in Ukraine that led to his impeachment and subsequent acquittal, has been in a standard prepublication security review for classified information with the White House National Security Counsel since Dec. 30, according to Bolton’s lawyer, Charles Cooper.The NSC and Bolton’s team have been at odds about the information in the manuscript, according to letters exchanged between the two and provided by Bolton’s attorney and the White House. The NSC found the book to contain “significant amounts” of classified information, but Bolton’s lawyer pushed back, claiming that none of it “could reasonably be considered classified.”Bolton said Monday night that it has “not been [his] intention to reveal any classified information, but to tell people what actually went on so that they can judge for themselves whether it’s appropriate.””I really hope it is not suppressed,” Bolton said of the book.Yet despite Bolton’s stated desire to share his knowledge of the president’s personal involvement with Ukraine, he refrained from offering up any new information Monday night. Instead, he encouraged people to read his book.When asked if he agreed with the president’s statement that his July 25 call with Ukrainian President Volodymyr Zelenskiy was “perfect” — a question the moderator said was submitted by “several” students — Bolton joked that the audience will “love chapter 14.”The audience applauded when the moderator asked why Bolton doesn’t just simply reveal what he knows, despite not being subpoenaed to testify in the Senate impeachment trial. Bolton cited “the prepublication review process and the threat of possible legal action by the executive branch” as the main reasons.Bolton did note that Ukraine was just a small portion of his upcoming book about his time working in the Trump administration, referring to those chapters as merely “the sprinkles on the ice cream sundae” and hinting at much more to come.Reporters were only permitted to record the first portion of the event. But ABC News has obtained audio of Bolton’s full remarks.Duke University officials declined to comment on the specifics of Bolton’s speaking arrangement.In the upcoming book, The Room Where it Happened: A White House Memoir, Bolton makes at least two explosive allegations about Trump, according to excerpts of the manuscript obtained and released by the New York Times: that Trump personally tied aid to Ukraine with investigations into former Vice President Joe Biden and his son, and that Trump tasked Bolton with setting up a meeting between Zelenskiy and Rudy Giuliani, the president’s personal attorney.ABC News has not independently reviewed Bolton’s manuscript.Trump has categorically denied Bolton’s allegations.“I never instructed John Bolton to set up a meeting for Rudy Giuliani, one of the greatest corruption fighters in America and by far the greatest mayor in the history of N.Y.C., to meet with President Zelenskiy,” Trump said in a statement to the New York Times after the article was published. “That meeting never happened.”Bolton’s time in the Trump administration has been the center of much speculation. During the impeachment inquiry, witnesses painted Bolton as someone both aware of and opposed to the president’s efforts in Ukraine.Fiona Hill, the former senior director for Europe and Russia on the White House’s National Security Council, who reported to Bolton, suggested during her impeachment testimony that Bolton had attempted to distance himself from the alleged scheme.”I am not part of whatever drug deal [former U.S. Ambassador to the European Union Gordon] Sondland and [acting White House Chief of Staff Mick] Mulvaney are cooking up,” Hill testified that Bolton asked her to relay to the White House legal counsel on his behalf. Bolton also appeared to express his frustrations with Giuliani, with Hill testifying that Bolton called him a “hand grenade” that was going to blow everyone up.Bolton, a long-standing Washington figure and lawyer who served under the Reagan administration and both Bush administrations, left the Trump administration in September 2019, in an exit that appeared contentious.News of Bolton’s departure came from an unexpected tweet from the president, in which he said that he “disagreed strongly with many of [Bolton’s] suggestions” and announced he had asked for his resignation.Bolton, the president’s third national security adviser, disagreed with that account, telling ABC News Chief White House Correspondent Jonathan Karl that he was never asked to resign, and that his departure was on his initiative, not the president’s.”I offered to resign last night,” Bolton told ABC News at the time. “He never asked for me to resign directly or indirectly. I slept on it and resigned this morning.”Reflecting on his time in the administration on Monday night, Bolton said he “was willing to put up with a lot” in order to “pursue the right policies for America.””I’m not asking for martyrdom,” he said. “I knew, I think I knew, what I was getting into.”