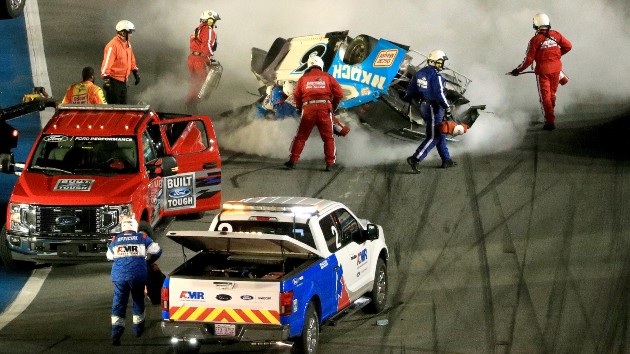 (DAYTONA BEACH, Fla.) — NASCAR driver Ryan Newman is in serious but non-life-threatening condition following a fiery crash at the end of Monday night’s Daytona 500, officials say.”Ryan Newman is bring treated at Halifax Medical Center,” said a statement by Newman’s racing team, Roush Fenway Racing. “He is in serious condition, but doctors have indicated his injuries are not life threatening.” Newman was leading the race into the final lap when he skidded out while trying to avoid his pursuers. His car slammed into a wall and flipped over, then was struck by at least one car from behind, causing the vehicle to fly through the air.After landing, the car slid on its roof as sparks flew, then it briefly burst into flames as it came to rest upside-down on its roof.Newman was inside the car as crews raced to extinguish the flames and free him from the vehicle. He was extracted from the car and taken to the hospital.Denny Hamlin won the race for the second year in a row. Hamlin began celebrating his win after crossing the finish line, but became more somber when he saw the crash.”It’s a weird balance of excitement and happiness for yourself — but obviously, someone’s health and their family is bigger than any win, in any sport. So we’re just hoping for the best,” Hamlin told ESPN in an interview after the race.NASCAR drivers and racing fans sent words of support for Newman and his family. Jeffrey Earnhardt, who lost his grandfather Dale Earnhardt in a crash during the 2001 Daytona 500, tweeted that he was praying that Newman was OK.”Never good to see a wreck like that,” he said.The race began Sunday but was postponed midway through because of rain. Copyright © 2020, ABC Audio. All rights reserved.