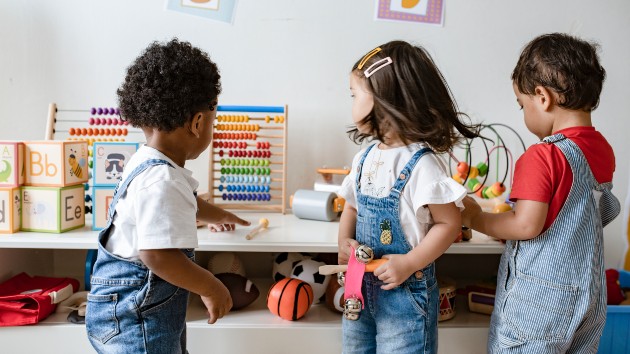 (NEW YORK) — If you have a child born 2010 or later, you’re parenting a Generation Alpha.The jobs they’ll have some day? Many don’t currently exist. They will have more formal education than any generation before them.The majority of their parents? Millennials.The term “Generation Alpha” was coined by Mark McCrindle, a social researcher in Australia. While the traits and habits of Gen A are of great interest to advertisers, there’s much about the latest generation their parents need to know.”Generation Alpha began being born in 2010, the year the iPad was launched, Instagram was created and ‘app’ was the word of the year,” Ashley Fell, the communications director for the research company McCrindle, told Good Morning America. “They are the first generation of children to be shaped in an era of portable digital devices, and, for many, their pacifiers have not been a rattle or a set of keys but a smartphone or tablet device.”Fell told GMA parenting a Generation Alpha really comes down to five areas: digital, social, global, mobile and visual.

DigitalKids born after 2010, Fell said, are “part of an unintentional global experiment where screens are placed in front of them from the youngest age.” As a result, they are less proficient in practical skills, assessing and approaching risk and setting and achieving goals.”Helping Generation Alpha to develop specific skills such as STEM [Science, Technology, Engineering, Math], as well as social competencies, entrepreneurial skills, strength and coordination, financial literacy, innovation, resilience and resourcefulness will be key to enabling them to thrive in the future,” Fell said.

SocialThis group is, more than any other in history, extensively connected to and shaped by their peers. They are connected 24/7 across social, geographic and demographic boundaries.”Our research shows that a quarter of students who have been bullied, have been bullied via social media, text messages or email,” Fell said. “In response, the trend of well-being has been steadily increasing over the last few years, particularly in schools and in the workplace. In the last five years, almost half of parents have increased their expectations of their child’s school to support well-being. More than one in four have significantly or somewhat increased their expectations.”

Global“Wherever they are in the world, Generation Alpha are influenced by the same movies, music, fashions and food,” Fell told GMA. “In this wireless world their technology knows no boundaries and nor do their blogs, friendships and vocabulary.”As a result, it’s crucial for parents to prepare Gen A for a global workforce. While digital skills and creativity are expected to be high, critical thinking skills are ranked low among this generation by their own parents.”As the world of work changes, it is the character qualities as well as competencies that will future-proof Generation Alpha,” Fell said.

MobileAccording to McCrindle’s research, the average time people stay in a work role is just under three years. If the current trend continues, by the time Generation Alpha enters the workforce then they will have on average 18 different jobs over six distinct careers.”Many of these future jobs don’t currently exist, with the World Economic Forum predicting that 65% of those entering primary school today will end up working in entirely new job types,” said Fell. “Many students today learn skills in robotics, coding, social media marketing, app development and big data analytics to prepare for these futuristic jobs.”

VisualFell told GMA: “We have an emerging generation, many of whom are opting to watch a video summarizing an issue rather than read an article discussing it.”As a result, messages have increasingly become image-based. Signs, logos and brands communicate across the language barriers with color and picture rather than words and phrases.”As such, a shift is occurring for Generation Alpha, with learning styles switching from structural and auditory to engaging, visual, multi-model and hands-on methods of educating this emerging generation,” Fell said. “Because their parents will indulge them in more formal education and at an earlier age, Generation Alpha will have access to more information than any other generation gone before. Their formal education has never been equaled in the history of the world, with a predicted 1 in 2 Generation Alphas to obtain a university degree.”

What to watch out forParents of Generation Alpha have some challenges. Fell said chief among them are watching out for screen addiction, cyber bullying and the management of child-friendly content.”While parents have some unique challenges, it is encouraging to remember the Millennial parents of Generation Alpha have themselves been shaped in the digital world, so are better equipped to manage these complexities,” she said.Parents need to now, as always before, be leaders for their children.

“Parents need to give Generation Alphas confidence, as many young people face insecurities and mental health issues about an uncertain future that is constantly being painted for them,” Fell said. “They should encourage Generation Alphas to invest in the future. By investing in training and education in both life skills and people skills, Generation Alphas can remain relevant and have the confidence to move forward.”Copyright © 2020, ABC Audio. All rights reserved.